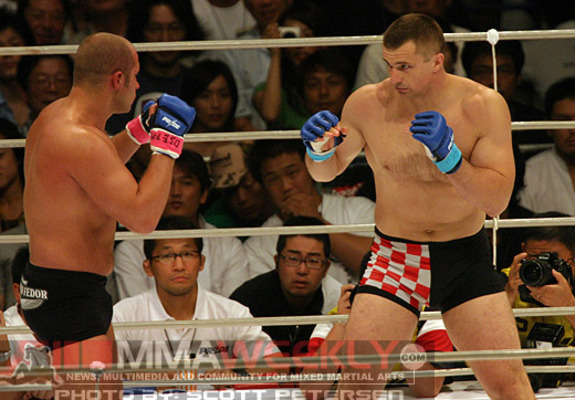 Mirko Filipović is ineligible for regional rankings due to inactivity.
Fighters must have at least one completed MMA bout in the past two years to be ranked.

From 2001-2003, Filipovic became one of the most feared MMA fighters on the planet, assembling in two short years a career’s worth of gruesome knockout victories over the likes of Pride FC stars Kazuyuki Fujita, Kazushi Sakuraba, Heath Herring, and Igor Vovchanchyn. Filipovic, who famously quipped “right leg, hospital; left leg, cemetery,” was capable of ending a fight at any moment with a well-placed kick to either the head or to the body. At his peak, Cro Cop’s icy, impassive demeanor could visibly rattle opponents as he calmly stalked them around the Pride ring.

Crocop’s aura of invincibility began to crack, however, when he was shockingly submitted in the second round by Antonio Rodrigo “Minotauro” Nogueira in a fight Filipovic was dominating at Pride Final Conflict 2003. While he would go on to lose other notable fights to Kevin Randleman in a huge upset during the 2004 PRIDE Heavyweight Grand Prix, Fedor Emelianenko in a decision, and Mark Hunt while competing for PRIDE, Filipovic would remain one of the biggest stars in the promotion, often sensationally defeating top opponents like Aleksander Emelianenko, Josh Barnett (three times), Kevin Randleman, Mark Coleman, Hidehiko Yoshida, and Wanderlei Silva before the collapse of PRIDE FC in 2007.

During his stay at PRIDE Fighting Championships, Mirko "Cro Cop" in 2006 defeated such big names as Ikuhisa Minowa, Hidehiko Yoshida, Wanderlei Silva (alternate for injured Fedor Emelianenko) and Josh Barnett to gain him the prize of the 2006 PRIDE FC Open-Weight Grand Prix Champion. It is an event that Mirko states as one of the happiest moments of his life by winning the Grand Prix on his 32nd Birthday.

Since moving to the UFC in 2007, Filipovic has met with mixed results, including an all-time highlight reel knockout loss at the hands of Gabriel “Napao” Gonzaga. Nevertheless, fans still recall Cro Cop’s halcyon days in Pride, punctuated by his triumph in the Pride 2006 Open Weight Grand Prix, as the stuff of legend. Following a pair of devastating knockout losses to Frank Mir and Brendan Schaub in 2010-11, UFC President Dana White announced that fans had likely seen the last of the Croatian legend in the UFC.

But later in 2011 Dana felt it necessary to give Mirko one last fight stating that "He deserves it", so in October of 2011 Mirko walked into the octagon once more to take on former IFL Champion and TUF winner Roy "Big Country" Nelson. In a very entertaining fight Mirko showed his past former self that many have seen in his PRIDE days, but the very durable Nelson used his tough chin and defeated "Cro Cop" in round 3 in their very competitive contest. After his defeat Mirko thanked his fans for their loyal support and stated that he is retired from the sport of MMA.

Mirko Filipovic is still retired to this day from MMA, but his competitive spirit still shines as he still participates in a sport that brought him into the competitive spot light. That sport is K-1 Kickboxing, were he made his K-1 comeback against the likes of K-1 Legend Ray Sefo were he earned the unanimous decision victory. He is still competing to this day in K-1 and showing no times of stopping his passion for fighting.

After over 1 year of an MMA hiatus, Mirko accepted a fight under the Japanese Promotion Company of Inoki Bom-Ba-Ye or IGF. He faced popular sumo wrestler  Shinichi Suzukawa in his pro MMA debut in a traditional Japanese MMA New Years Event. As the main MMA event in a generally mixed rule card where Mirko took on his opponent and defeated him in non traditional fashion by Mirko winning by an armlock in the very first round. Which makes it Filipovic's  3rd official submission via choke or armlock.

Recently Mirko "Cro Cop" has been competing in both Kickboxing and MMA since is victory New Years Eve in 2012. First wining a K-1 Grand Prix in 2012 and going 1-1 under GLORY kickboxing, and notably Filipovic has been 2-1 in his last three bouts in MMA with a lose against Oleksiy Oliynyk in "Cro Cop's" Russian debut, and 2 wins against Judo gold medalist Satoshi Ishii in Japan. After his streak, Mirko had been approached by MMA organization Bellator MMA about participating in the up and coming promotion. However those plans were reportedly shut down from a counter offer from the UFC. After said offer, Mirko "Cro Cop" Filipovic officially resigned with the UFC stating on his Facebook page...

"My huge wish before I hang my gloves up is to do some rematches in the UFC, that is something I really wish and I will be more prepared than ever..."

Even though it has been about 8 years since his original UFC debut and 3 years since his last UFC fight, the 40 year old Mirko Filipovic still hopes to "Not disappoint" his fans upon his return.

For his first fight back in the UFC, Mirko will get his first wish in rematching the man that handed him his most brutal defeat, Gabriel Gonzaga. The two met again on April 11th 2015 in Kraków, Poland and Cro Cop won via TKO (elbows) in round 3.

Mirko supposed to face Anthony Hamilton at Seoul, South Korea, on November 28, 2015 but Mirko admitted he used HGH to treat his shoulder injury and eventually get suspended by USADA for 2 years although his drug test came back negative. Mirko announced his

retirement afterwards for the 2nd time.

In July 2016, Cro Cop & the UFC agreed to terminate his contract, then Mirko come back from retirement to be a part of RIZIN Openweight Grand Prix 2016. On September 25, He defeated ROAD FC's Hyun Man Myung in the opening round via arm-triangle submission. On December 29, He defeated former Strikeforce Light Heavyweight Champion, Muhammed ''King Mo'' Lawal via TKO in round 2 at the quarterfinals. On NYE, he won the semifinals against popular sumo wrestler Baruto via KO (knee to the body) in just 49 seconds in round 1 and he defeated decorated Iranian wrestler Amir Aliakbari via KO (punches) in round 1 to become the RIZIN Openweight Grand Prix 2016 Champion. He announced his retirement again, ended his career with his impressive 7 winning streak.

In February 2019 Cro Cop suffered a stroke which may have stemmed from a neck injury and possible seizure in the lead up to final fight and rematch against Roy Nelson at Bellator 216. This injury finally forced Cro Cop's hand, and he announced his retirement from active competition, this time for good.