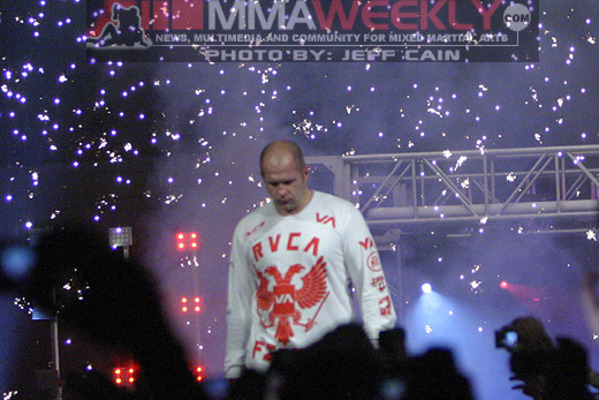 Fighting for a major organization has made Fedor Emelianenko ineligible for regional rankings.

Machinemen takes us through the epic rise of Fedor Emelianenko in this career highlight video produced before Fedor's loss to Werdum.

Fedor Emelianenko is a mixed martial arts legend, considered by many the greatest fighter in the history of the sport. Hailing from Russia, “The Last Emperor” began his martial arts training in the disciplines of Combat Sambo and Judo, and was among the world’s greatest Sambo practitioners both before and after his highly successful entrance into mixed martial arts.


Before entering the world of MMA, after finishing high school Fedor Emelianenko served in the Russian Army as a firefighter. At his best, Fedor excels at virtually all of the skills necessary to compete in top-flight MMA, including uncanny quickness and balance for a heavyweight, extraordinary takedown ability, throws and throw defense, a full arsenal of top and bottom game submissions, and legendary ground-and-pound. In recent years Fedor has also contributed one-punch or near-one-punch knockouts over some of MMA’s elite heavyweight competition, including Andrei Arlovski and Brett “The Grim” Rogers, further solidifying him as one of the most complete fighters in the sport’s history. Fedor is best known for a trilogy of dominating fights over Antonio Rodrigo “Minotauro” Nogueira in Pride (the second of which was called off due to an inadvertent cut), and his legendary win over Mirko “Cro Cop” Filipovic at Pride Final Conflict 2005.
Emelianko's first fight was Nogueira was surprising because of "Big Nog's" feared submission game. Yet Fedor dared to take down Nogueira, and would bait potential submission holds in order to land punches from inside of Nogueira's guard. Their second match would end in a no contest after 3:52, but their third was another classic fight. This time Fedor would stand the majority of the fight but would still take home the decision victory.

Emelianenko has further distinguished himself with his ability to escape from dangerous, potentially fight-ending situations, including a disorienting blow to the head courtesy of Japan’s Kazuyuki “Ironhead” Fujita, a memorable suplex slam onto his head versus Kevin Randleman, and a series of deep cuts and gashes against fighters such as Matt Lindland and Brett Rogers. As such, Fedor’s ability to “find a way to win” can rightly be considered among his greatest championship attributes.

In addition to his physical and technical ability, Emelianenko is known as a master of gameplanning, particularly against Filipovic, whom Fedor elected not only to stand with, but to stalk, in the early goings of the fight, a technique he used to great effect in gaining a decision victory. His stalking was key, as Filipovic could not throw his celebrated head-kicks with full force. He also would kick "Cro Cop" without turning his hips, which would have reduced his power, but allowed him to land before Filipovic's more powerful kicks.

Also adding to the Russian’s mystique is his reliance on traditional training methods such as outdoor push-ups and pull-ups, dips and extensive road work, frequently at altitude. MMA forum and blog contributors delight in depicting “The Last Emperor” as an indestructible half-man, half-machine humanoid, à la The Terminator. Despite his smaller size in comparison to his opponents, Fedor found more success at heavyweight than most could ever hope to achieve.

The major criticism of Emelianenko was that he faced several less than remarkable opponents, such as Zuluzinho, Hong Man Choi, and Yuji Nagata. His later victories against former UFC champions Tim Sylvia and Andrei Arlovski are diminished by his detractors, due to the failings both men had after facing the "Last Emperor."

Fedor's first legitimate loss in roughly a decade came at the hands of Brazilian Jiu-Jitsu fighter Fabricio "Vai Cavalo" Werdum, who pulled off one of the sport's greatest upsets by landing a triangle choke / armbar combination on Fedor just minutes into the fight, forcing the great Russian fighter to tap. The always-humble Emelianenko accepted the loss in stride and vowed to be back.

After the lose to Werdum, Fedor entered in the Strikeforce Heavyweight Grand Prix, a Grand Prix that many people thought that Fedor would win. After being matched up with relatively unknown Antonio "Bigfoot" Silva, Fedor entered the Strikeforce Cage as a heavy favorite to beat Silva, but after a brutal defeat at the hands of a much larger Silva it was a sign that the once great Fedor was not as invincible as others saw.

As the first losing streak of Fedor's career, it seemed like Fedor's great run was at an end. Another loss occurred  to Emelianenko after he met fellow PRIDE FC alum Dan Henderson in the cage for a Strikeforce super fight. With his 3rd straight lose, Fedor went back to his winning ways after beating experienced opponent in Jeff "The Snowman" Monson in his home country of Russia. Fedor soon returned to the country that brought him great fame in his past by fighting Satoshi Ishii in Japan. After achieving his second straight win, Fedor sought to fight former UFC Title Challenger Pedro "The Rock" Rizzo in Russia under M-1 Global. After a first round knockout for Emelianenko, Fedor took this opportunity to ride off into the sunset and retire from the sport that has brought him such pride and glory throughout the MMA world.

After three years since his victory over Pedro Rizzo, Fedor Emelianenko announced on July 14, 2015 that he would come out of retirement and begin his training for his return to active competition; while also retiring from his post in the Russian Ministry of Sport.  This announcement sent shock waves throughout the MMA community and many began to speculate where Fedor would sign.  By early September, it was reported by Combat Press that Fedor Emelianenko had signed with the UFC and that the official announcement was to be made within a couple weeks.

This news was considered by many analysts and fans as an amazing feat by the UFC, because of the checkered past between the promotion and Emelianenko in prior negotiations to bring the Last Emperor into the UFC dating as far back as 2007; primarily stemming from issues between Dana White and Emelianenko's management team headed by Vadim Finkelstein during these multiple contract negotiations.  However, Dana White dispelled rumors that Fedor had signed with the organization at a UFC 193 press conference, stating that Fedor had not signed the contract the UFC had submitted to him.

After months of speculation, Fedor finally confirm who he was going to sign with at Bellator's DYNAMITE event; announcing that he had signed with RIZIN Fighting Federation, a new Japanese MMA promotion ran by former Pride FC executive Nobuyuki Sakakibara and that he would fight on their New Years Eve show.
On the RIZIN New Year's Eve show, the Last Emperor made his return to Japan for the first time in four years since his win over Satoshi Ishii and fought former K-1 kickboxer and then Deep Megaton Champion Jaideep Singh and finished him with ease as Singh would tap to punches three minutes into Round 1.
Following his triumphant return to the world of MMA, Fedor would then take on a stiffer challenge in former UFC fighter Fabio Maldonado at Fight Nights Global 50 in St Petersburg.  This fight would really test the former Pride Heavyweight Champion as Emelianenko would get battered around in the first round, with many arguing that it should have been stopped.  Fedor would ultimately come back and fight valiantly midway through round two and onward.  Emelianenko would ultimately gain a highly controversial majority decision win over Maldonado, as many pundits and fans argued that it should have been a draw or a win for Maldonado.  After his time spent in Fight Nights Global, the rumor mill yet again began to turn as to where Emelianenko would sign as many believed he would finally stop delaying and officially join the UFC.  This would not come to pass, however, as Fedor would end up signing a contract with his old business partner Scott Coker and join Bellator MMA and was scheduled to fight former UFC veteran Matt Mitrione at Bellator 172 in San Jose.  The fight would ultimately get pushed back to the Bellator NYC card as Mitrione had issues with a kidney stone leading up to Bellator 172.
In his first fight in the USA in almost six years since he lost to MMA legend Dan Henderson, Fedor would again feel the sting of defeat at Bellator NYC as Matt Mitrione would score a crazy flash knockout over Emelianenko 1:14 seconds into round one.  Many speculated at the time that this would be end of Fedor's return tour and he would head back to his government position in Russia.  However, in November of 2017, Fedor Emelianenko was revealed as one of the eight competitors in Bellator's Heavyweight Grand Prix as he would take on Frank Mir in the quarterfinals at Bellator 198 in Rosemont, Illinois.  Despite coming in as the underdog, the Last Emperor would shock everyone as he would go on to knockout the former UFC Champion at Bellator 198 48 seconds into round one, moving on to fight Chael Sonnen in the semi-finals.
October 13th 2018 Fedor faces Chael sonnin in the semi finals of the bellator grande prix. He wins the fight with another first round TKO. Moving on to face Ryan Bader in the finals.
Saturday January 26 Fedor Emilianenko faces Ryan Bader in the finals. Fedor gets caught with a lead left hook followed by ground and pound resulting in a TKO at 35 seconds in round one.


Fedor is a current co-owner of the Russian based MMA organization M-1 Global, along with his manager, Vadim Finkelstein.

Fedor is a 1st Razryad Grand Master in Russian Sambo where he holds many gold medals, along with an international black belt in Judo. His younger brother Aleksander was also an accomplished mixed martial artist, who also retired in 2012.