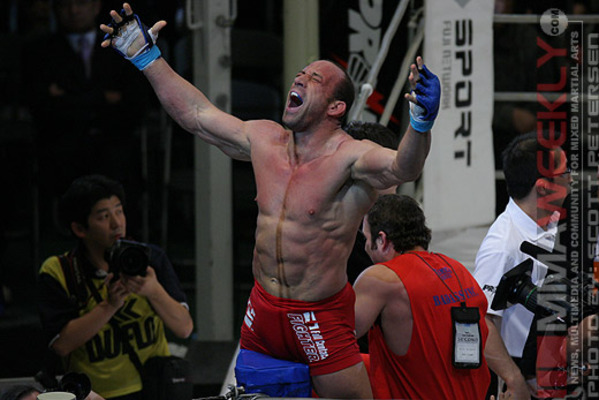 Mark Coleman is ineligible for regional rankings due to inactivity.
Fighters must have at least one completed MMA bout in the past two years to be ranked.

MMA legend Mark Coleman started his mixed martial arts career off with a bang in the UFC, defeating powerful opponents Gary Goodridge and Don Frye en route to winning the UFC 10 tournament in July of 1996. He then won the UFC 11 tournament. He was to be in the Ultimate Ultimate 96 but had withdrawl shortly before the event due to the flu. Shortly thereafter, the powerful, thick-set Coleman became the first-ever UFC Heavyweight Champion, defeating fellow UFC Hall of Famer Dan Severn with a vicious Neck Crank at UFC 12 on February 7, 1997.

After losing four fights in a row, including an infamous head kick knockout to Pete Williams inside the Octagon, Coleman revived his career in a big way by improbably winning the Pride 2000 Openweight Grand Prix, defeating Kazuyuki “Ironhead” Fujita and Igor Vovchanchyn in his run to the title. Winning what was at that time the biggest MMA tournament in history remains the high water mark of Coleman’s career.

A powerful wrestler with a significant size and weight advantage over many of his opponents, Coleman gained renown for his vicious, simple, and highly effective fighting strategy, which consisted of shooting on an opponent with a double leg takedown, driving him to the mat, sitting inside his guard, and dropping bombs from the top position until his helpless foe eventually wilted. This strategy, which Coleman effectively created and perfected in the early days of the sport, has been popularized by the term “ground and pound,” now a permanent part of the MMA lexicon. It remains one of the most direct and effective fighting styles in modern MMA, especially for combatants with a strength and wrestling advantage. Though his nickname remains “The Hammer,” as Coleman moves into the twilight of his cagefighting career he is often referred to as “The Grandaddy of Ground and Pound.”

Alongside his career highs, Coleman has experienced dispiriting defeats to MMA royalty like Fedor Emelianenko (twice), Antonio Rodrigo “Minotauro” Nogueira, Mirko CroCop and Randy Couture. However, Mark Coleman can rightly say that he fought the best and ducked no one. His legacy is secure, and in demonstration thereof, on March 1, 2008 he became only the fifth person to be inducted into the UFC Hall of Fame.

Mark was also a NCAA wrestling champion, silver medalist in freestyle for the 1991 world championship and finished seventh place at the 1992 Olympics. He was one of the most decorated wrestlers in UFC history.