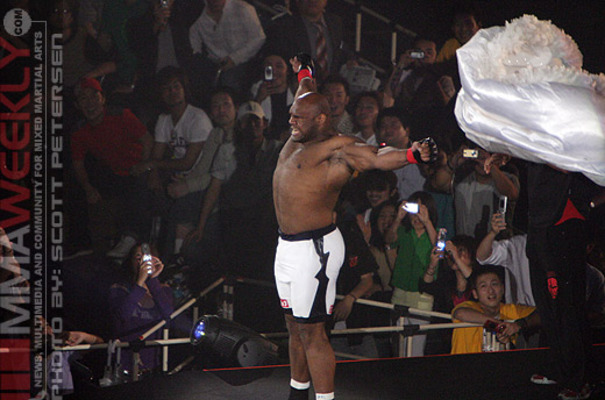 Bob Sapp began his athletic career in college football as a standout offensive lineman for the University of Washington, where he won the Morris Award. Expected by some to get high notice from pro scouts in the 1997 NFL Draft, he slipped to the third round before being chosen by the Chicago Bears 69th overall. Although Sapp was under pro contract for the next four seasons (Chicago Bears 1997, Minnesota Vikings 1998, Baltimore Ravens 1999, and Oakland Raiders 2000, each of which cut him within that season), he appeared in only one regular season game before leaving football.

Sapp then reemerged in Japan, where he quickly burst onto the international kickboxing scene. He joined the Japan-based K-1 kickboxing promotion in 2002, where the massive, enormously muscular former footballer used sheer brawn and intimidation to defeat top-level fighters such as Ernesto Hoost (twice), Akebono, and Yoshihiro Nakao.

Sapp went on to compete in mixed martial arts under the K-1 and now-defunct Pride Fighting Championships banners, with uninspired if entertaining results. He beat a variety of veterans, but never managed to break into the top rankings because of his one-dimensional fighting style, which relied almost exclusively on his incredible size and weight to ragdoll smaller opponents. He lost an epic war to Minotauro Nogueira under such circumstances, in a quintessential display of Jiu-Jitsu overcoming extraordinary brawn. Against larger opponents such as Mirko “CroCop” Filipovic, Sapp never appeared to handle a punch well.

Through 2011 and 2012, Sapp's MMA career took a turn for the disastrous - some would say dubious - as he began a multi-fight losing streak to journeymen fighters, losing each bout within the opening minutes of the first round to strikes. In more than one of the affairs Sapp neglected to do so much as throw a punch, instead cowering and receiving a beating until the referee mercifully stopped the action. The peculiar looking circumstances prompted many analysts to conclude Sapp was throwing fights, though there has not been formal proof of the charge.

Whatever the status and legitimacy of his current fighting career, Sapp’s greatest gifts have been on display outside of the ring. A natural and charming entertainer who skillfully marketed his strikingly unusual appearance in mainland Japan, Sapp has amassed considerable wealth and celebrity through countless Japanese television appearances and commercials. Sapp has also maintained a professional wrestling career in Japan, where he was named the “Most Charismatic” wrestler by the Wrestling Observer Newsletter in 2003, and appeared in the 2011 “Conan” film in a leading role, as the villain Ukafa. He continues to profit handsomely from MMA even through the worst losing streak of his career. In addition to football and MMA, Bob Sapp has appeared in 14 Movies or TV series, most notably The Longest Yard where he played the easy going Swotowski.