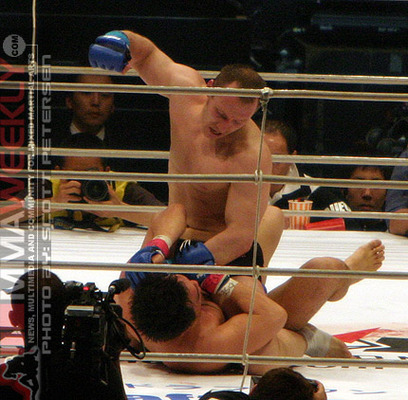 #65
Greatest MMA Striker of All Time

Igor Vovchanchyn is ineligible for regional rankings due to inactivity.
Fighters must have at least one completed MMA bout in the past two years to be ranked.

Igor Vovchanchyn is a retired Mixed Martial Artist from Ukraine remembered for many of Pride Fighting Championship’s greatest early ring wars. A renowned striker with a knack for the spectacular knockout, Vovchanchyn literally defined “heavy handed,” with some of the largest fists of any fighter in MMA’s fledgling era. As a result, in his heyday Vovchanchyn possessed some of the most feared ground-and-pound in the sport, and did so without the freestyle wrestling background often associated with that style of attack. He was supposed to fight at UFC 11 but could not due to visa issues. He never again had a chance to enter a UFC event.

Vovchanchyn, who at one point reputedly compiled a 30 fight winning streak in various lesser promotions, is best remembered for his pair of bouts against Mark Kerr. Though the first technically ended in a no-contest after Vovchanchyn illegally kneed the head of his grounded opponent, the appearance in the ring at the end of the fight was that Vovchanchyn had won, and it was widely regarded as “The Smashing Machine’s” first professional setback. In their 2000 rematch a little over a year later, Vovchanchyn outlasted Kerr, who was not well mentally or physically, by decision.

Vovchanchyn is now retired from mixed martial arts, and runs a catering business in the Ukraine.