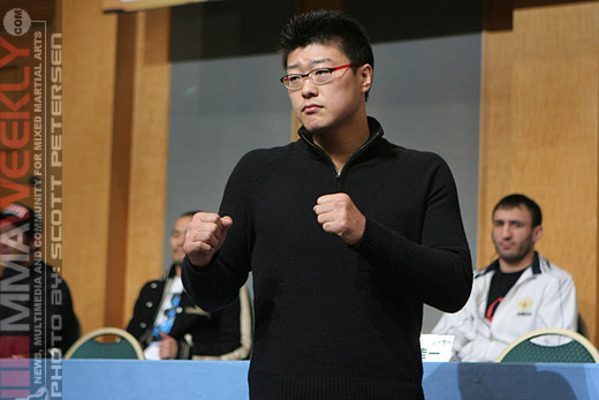 Mizuno started competing in judo in high school, and holds a 3rd dan black belt in the discipline. On April 29, 2005, he became the champion of 5th Shooto East amateur mixed martial arts tournament, and on December 23, 2005, he took part in the U-FILE CAMP amateur tournament as member of Pankurasu geto. Aside from competing in MMA, Mizuno is also a principle.

Mizuno has fought in numerous mixed martial arts organizations including Pancrase, One FC, M-1 Global, and ProElite MMA. He has also competed in K-1 and Glory under mixed martial arts rules. He began his professional mma career in 2006 with Pancrase rattling off three straight submission victories before running into Brazillian knockout artist Thiago Silva at Pancrase Rising 2 in February of 2007. Silva landed a devastating soccer kick 4:29 into the first round after a failed hip toss attempt by Mizuno resulting in the first loss of his professional career. In his next fight Mizuno would challenge UFC and Pride veteran Assuerio Silva for the Heavyweight King of Pancrase title at Pancrase Rising 5 but Mizuno would suffer a similar fate losing to Silva by TKO via ground and pound 2:08 into the second round.

After rebounding with a TKO victory Mizuno moved up to heavyweight to face legendary striker Mirko Cro-Cop at Dream 1 in March of 2008. Cro-Cop proved to be too much for Mizuno dropping him with a flurry of punches 0:56 into the first round. After his loss to Cro-Cop Mizuno went on to sign with Russian based promotion M-1 global. In his M-1 debut Mizuno moved back to light heavyweight facing off against current Deep lightheavyweight champion Yoshiyuki Nakanishi earning a TKO victory 4:13 into the first round. Mizuno went on to participate in the second M-1 challenge fighting for team Japan. He went 2-2, earning victories over Jose Beltran Martinez and Rafael Rodriguez while suffering defeats to Bruno Carvalho and Tom Blackledge.

After a TKO victory over Ilir Latifi under the K-1 banner  Mizuno began training with Matt Hume signing on to compete in Dream's light heavyweight grand prix. The semi-finals saw Mizuno pitted against Dutch striker Melvin Manhoef at Dream 15. In a exciting back and forth fight Mizuno locked in a kimura submitting Manhoef late in the first round. However, he would lose in the finals to Middleweight Champion Geard Mousasi. His next fight occured on K-1's New Year's Eve event Dynamite!! Power of Courage 2010. He faced Russian striker Sergey Kharitonov in a move back to heavyweight. Kharitonov left Mizuno unconscious with a brutal knee to the face 1:25 into the first round. Mizuno rebound with a knockout of his own at Dream: Fight for Japan defeating King of the Cage light heavyweight champion Trevor Prangley with a knee to the body 4:41 into the first round.

Mizuno then picked up a decision victory overseas in ProElite MMA before signing with Singapore based Promortion One FC. Next came back to back losses. He lost his One Fc debut against Renato "Babalu" Sobral falling victim to a first round armbar and dropped a unanimous decision to Dutchman Jason Jones at Glory 2: Brussels. Since, Mizuno has dropped down to middleweight and returned to One FC earning a decision victory over Portugese grappler Rafael Silva.

Mizuno has become a fan favorite in his home country of Japan. He is renowned for his heart and fighting spirit.