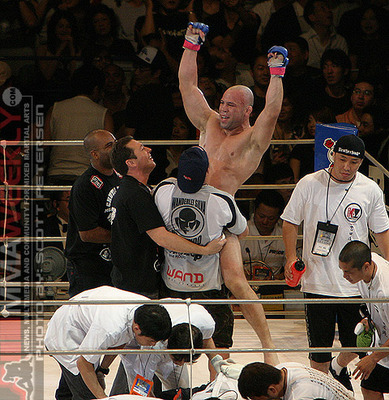 Wanderlei Silva is ineligible for regional rankings due to inactivity.
Fighters must have at least one completed MMA bout in the past two years to be ranked.

Another look at the career highlights of Wanderlei Silva by video maker xxTapoutxx.

Watch this training video with Wanderlei Silva courtesy of Affliction.

The legendary “Axe Murderer” Wanderlei Silva began fighting professionally in 1996 in his birth country of Brazil, participating in dangerous Vale Tudo-style bare knuckle contests which seasoned him to the worst of MMA violence at a relatively young age. Silva honed his trademark ferocity in those almost-no-holds-barred early matches, where headbutts, groin shots and other extreme tactics were permitted.

After racking up wins in smaller promotions, Silva started building one of the most impressive legacies in the history of the sport when he debuted for the Japan-based Pride Fighting Championships in 1999. Silva would go on to become one of its biggest stars. “The Axe Murderer” embarked on an extraordinary 18-fight unbeaten streak stretching from 2000-2004, finishing 14 of the fights by knockout or TKO and winning and repeatedly defending the Pride 205 lb. Championship in the process. He was criticized for the frequency of “hand picked,” second-tier Japanese fighters padding the multi-year winning streak, but Silva's definitive wins over Dan Henderson, Ricardo Arona and Quinton Jackson in Pride cannot be discounted.

A Muay Thai wrecking machine, Wanderlei Silva was without question the most feared striker in all of MMA during his legendary run in Pride FC. Combining a vicious Thai Clinch with superior reflexes, superb conditioning and an extremely aggressive fighting style, Silva literally tore his way through the majority of the best fighters in his weight class for almost a decade. His multiple victories over Kazushi Sakuraba and Quinton “Rampage” Jackson were perhaps the height of his legacy.

Shortly after the collapse of Pride in 2007, a slimmed-down Silva moved to the UFC and competed against some of the biggest names in the United States, including Chuck Liddell, Quinton “Rampage” Jackson, Rich Franklin, and Michael Bisping.

Once trained at the legendary Curitiba-based Chute Boxe Academy famed for its unique brand of violent aggression, Silva now trains out of a gym he owns and operates in Las Vegas, Nevada. He has publicly stated that he plans on fighting until he physically cannot continue to do so in order to please his loyal fan base. As he increasingly assumes the role of elder statesman, Silva remains one of MMA’s most beloved fighters. "The Axe Murderer" was given to Wanderlei Silva by the way he defeat his opponents with the knees. Wanderlei Silva has another nickname, he is known as "Cachorro Louco"(Crazy dog) in Brazil because of the way he defeated his opponents.

After a 17 month layoff Silva returned at UFC 132 in a much anticipated fight against Chris 'The Crippler' Leben, losing in the first round via knockout. At UFC 139 Silva would welcome the exciting/unorthodox striker Cung Le to the octagon. In a Fight of the Night performance Silva would go on to defeat Cung Le in the second round via TKO using knees and following it up with punches on the ground. Silva then hosted the first season of TUF Brazil alongside Vitor Belfort. The two were set to have  their rematch at UFC 147. Due to a broken hand suffered by Belfort the fight was called off, but Silva would have another rematch as a replacement. He would fight Rich Franklin, the two had fought 3 years earlier with Franklin picking up the decision win. In the rematch after nearly finishing Franklin in round 2 Silva would have another Fight of the Night performance, but would again lose to Franklin via unanimous decision. In an October interview with Sherdog, Silva stated that he would be open to going up in weight in 2013, whether it be a catchweight or a light heavyweight bout.

At UFC on FUEL TV 8, Wanderlei Silva made his much anticipated return to Japan, a country that has treated him extremely well in the past. He headlined the card against another slugger, Brian Stann. Both guys had been competing at MW in their last few outings, but this fight took place at Light Heavyweight. In a back and forth fight Silva was eventually able to TKO Stann in the second round proving he still has the finishing power he is known for. Silva also won Knockout of The Night and Fight of the Night for his efforts.

Silva would be a coach opposite Chael Sonnen for The Ultimate Fighter Brazil 3. The two have had heated confrontations already and should make for an entertaining bout when they finally meet up (after 2 cancelled bouts) at UFC 175: Weidman vs. Machida on July 5th, 2014.