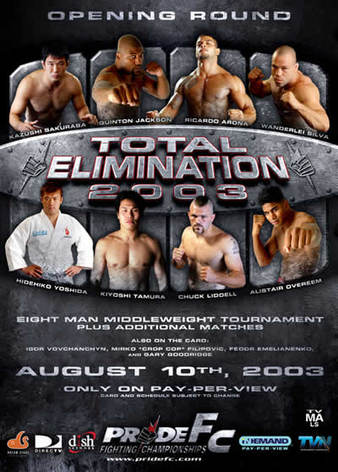 In one of the most popular tournaments in MMA history, Pride Total Elimination 2003 featured a middleweight (205lbs.) tournament pitting Pride’s biggest stars against one another in a single-elimination format. In the Quarterfinals, UFC superstar Chuck Liddell, Quinton Jackson, Hidehiko Yoshida, and Wanderlei Silva all earned victories and spots at Final Conflict 2003.

In other action, Antonio Rodrigo Nogueira won a controversial decision over Ricco Rodriguez after being controlled on the ground for most of the fight, while Mirko “Cro Cop” Filipovic earned the biggest win to date of his career by knocking out Igor Vovchanchyn with a head kick in the first round.