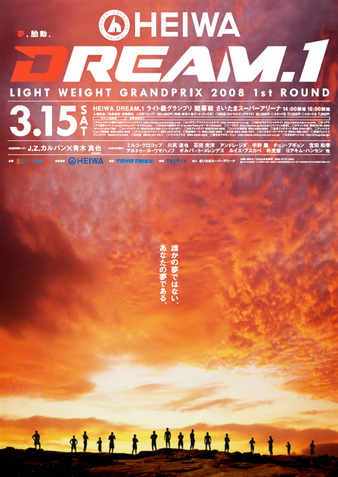 After the swift collapse of the Pride Fighting Championships—one of the premier fight organizations in MMA history—in 2007, Fighting and Entertainment Group, as well as former Pride executives at Dream Stage Entertainment, founded a new MMA organization in 2008, which they named Dream. Not surprisingly, Dream bore many of the same stylistic hallmarks of earlier Pride events, from the stadium lighting and video effects, to the ringside announcers, to the use of a ring instead of a cage.

At Dream 1, which was held in March 2008, the first round of the 2008 Lightweight Grand Prix kicked off, with fighters such as Joachim Hansen, Mitsuhiro Ishida, Eddie Alvarez, and Tatsuya Kawajiri all advancing to the Quarterfinals. An Opening Round bout between Shinya Aoki and Gesias Cavalcante was declared a No Contest after Cavalcante delivered an unintentional illegal elbow in the first round.

Due to injuries suffered by other participants, Caol Uno was seeded directly into the Quarterfinals of the tournament.