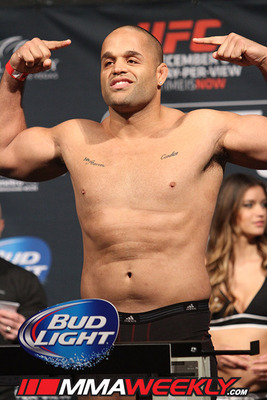 Anthony Hamilton is ineligible for regional rankings due to inactivity.
Fighters must have at least one completed MMA bout in the past two years to be ranked.

Anthony Hamilton was born on 14 April, 1980, in Seattle, Washington, United States. Currently Hamilton is fighting in the UFC Heavyweight Division, out of Albuquerque, New Mexico, with Wink's MMA.

In early 2014 Hamilton was signed to the UFC, after going 12 - 2 in regional promotions.

Hamilton made his UFC debut against Alexey Oleinik at UFC Fight Night 44: Swanson vs. Stephens, on 28 June, 2014. Hamilton lost the fight via 2:18 in Round 1 via Neck Crank submission.

Hamilton then fought Ruan Potts at UFC 177: Dillashaw vs Soto. Hamilton won the fight (TKO) with vicious punches to the body at 4:17 in Round 2. Giving Hamilton his first win in the UFC.

At UFC 181: Hendricks vs. Lawler 2, Hamilton immediately charged at his opponent - Todd Duffee. This gameplan did not bode well for him, as Duffee aggressively countered and dropped Hamilton only 33 seconds into the fight.

Trying the same strategy in the Duffee fight, Hamilton charged out towards Daniel Omielańczuk, at UFC Fight Night 64: Gonzaga vs. Cro Cop 2. He was unable to finish the fight, but controlled the first and third rounds on the ground and fence; respectively. Hamilton was awarded the victory via Unanimous Decision (29-28, 29-28, 29-27)