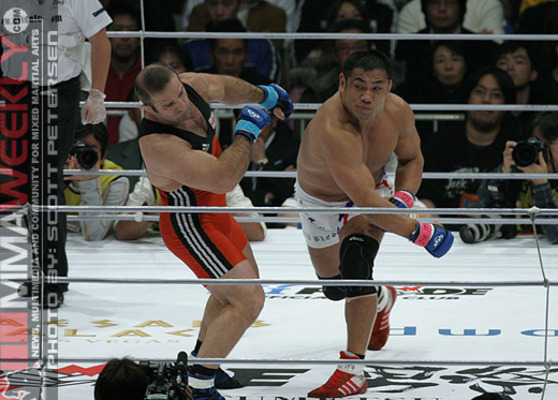 Kazuyuki Fujita is ineligible for regional rankings due to inactivity.
Fighters must have at least one completed MMA bout in the past two years to be ranked.

An accomplished amateur wrestler during his high school days in Japan, Kazuyuki “Ironhead” Fujita joined the wildly popular New Japan Pro Wrestling organization in 1993, gaining acclaim among wrestling fans before transitioning to professional mixed martial arts competition in 2000. In the first few years of his fighting career, Fujita established a reputation as one of the most durable fighters in the heavyweight division, defeating Mark Kerr, Ken Shamrock, Gilbert Yvel and others during his early career with Pride FC, and earning the nickname “Ironhead” in the process.

The defining moment of Fujita’s fighting career came in a 2003 fight with Fedor Emelianenko. During the contest, Fujita stunned Emelianenko with a heavy right hook that had the Russian champion staggering for a few heart-pounding moments. Unfortunately for Fujita, he became only another man to almost defeat “The Last Emperor.” Emelianenko bounced back from the punch to finish the Japanese wrestler with a combination of kicks and punches to the body and head, polished off with a Rear Naked Choke.

Fujita is known primarily for his passion and fighting spirit, and for the almost incomprehensible ability he has shown to absorb strikes to the head, which gave him his nickname, “Ironhead.”