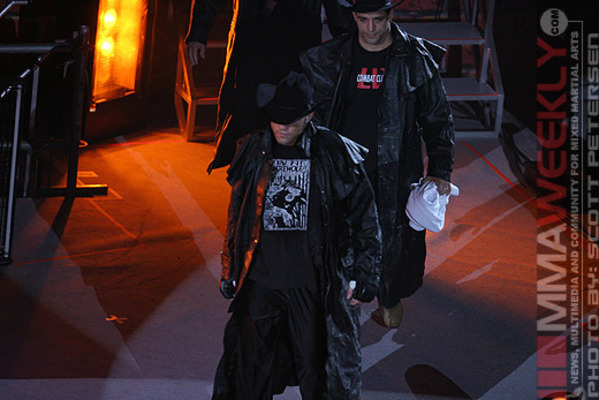 Heath Herring is ineligible for regional rankings due to inactivity.
Fighters must have at least one completed MMA bout in the past two years to be ranked.

Heath Herring is a colorful veteran MMA fighter who has fought many of the sport’s biggest names during a long career in Pride and the Ultimate Fighting Championship, including Antonio Rodrigo Nogueira, Brock Lesnar, Fedor Emelianenko, Mirko "Crocop" and others. Known as “The Texas Crazy Horse,” the Waco, Texas native is known to display tremendous passion and fire inside the ring. He is equally well known for gutting out tough contests and refusing to quit even after heavy beatings. For that reason, and perhaps because of his tendency to beat those fighters he is “expected” to beat but lose to those fighters in the upper echelons of the sport, Herring has assumed a gatekeeper role for the heavyweight division in recent years. Such a role makes sense as Herring guarantees a stiff test for any up-and-coming prospect, and as shown in wins over Cheick Kongo and Brad Imes in recent years, he can be a dangerous fighter to overlook.

Early on in his Pride career, Herring showed an interesting tendency to get “fired up” on a referee restart on the feet after being held down on the ground, and then, uncannily, finish the fight aggressively and decisively moments later. He did so more than once, including against Tom “Big Cat” Erikson in 2000. Herring is also remembered for his powerful knee strikes to the head in Pride, which finished more than one fight in his favor, and were a major loss to his arsenal when he entered the UFC, where such strikes are banned. “The Texas Crazy Horse” is also known for the wild hair style and color combinations he sports in the cage, and for entering the Octagon in cowboy hat and bowler.

Herring was involved in one of the most bizarre incidents in MMA history in the cage prior to his scheduled fight with Yoshihiro Nakao at K-1’s 2005 Dynamite!! year end show. As the two men approached the center of the ring for their pre-fight staredown, Nakao leaned forward and kissed Herring on the lips. Herring, in return, punched Nakao square on the jaw, knocking him out cold. After some deliberation, the fight was ruled a No-Contest.