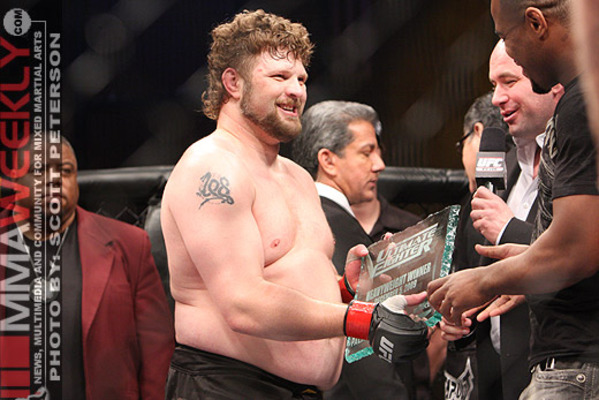 Fighting for a major organization has made Roy Nelson ineligible for regional rankings.

Roy "Big Country" Nelson started off his martial arts training in Shaolin Kung Fu. Big Country was also an athlete in multiple sports such as football, baseball and wrestling at Cimarron Memorial High School. Nelson holds a black belt in Brazilian Jiu-Jitsu under Renzo Gracie. Prior to his mixed martial arts career, Nelson was a highly decorated grappler becoming the 2003 Grapplers Quest Superfight Champion and becoming a quarterfinalist in the 2003 ADCC Submission Wrestling World Championships.

Despite criticism for his throwback training habits and protruding belly, Nelson has established himself as a heavyweight to watch in a division of giants. Being a member of Ken Shamrock's Lion's Den and winning 6 of his first 7 fights, Nelson was asked to become a member of Ken Shamrock's Nevada Lions in the now defunct IFL. With only 1 loss in the IFL coming via split decision at the hands of Ben Rothwell, Nelson achieved his first measure of success as a professional mixed martial artist when he challenged for and won the first and only IFL Heavyweight Championship in the now-defunct organization back in 2007. Nelson defended the title twice, defeating Fabiano Scherner and Brad Imes, both of them by TKO.

Nelson would hit a speed bump the following year when he lost back-to-back fights against highly respected UFC veterans Andrei Arlovski and Jeff Monson. The loss to former UFC HW Champion Arlovski wasn't without controversy. Roy Nelson was in side control and going for a kimura, then the fighters were stood up. After that Arlovski landed a few good shots, and the fight was stopped. The controversy didn't end there. Many MMA enthusiasts believe that the fight was stopped prematurely, and the stand-up was bogus. The loss to UFC veteran Monson didn't go without it's controversy either. Monson won the fight by decision, but the majority of MMA fans, enthusiasts, and analysts who watched the fight say that Nelson won the fight.

Nelson reinvigorated his career and launched himself to new heights when he competed in, and with apparent ease, won the tenth season of Spike TV’s popular reality show The Ultimate Fighter, along the way defeating famed internet sensation Kimbo Slice. The fight with Kimbo Slice was the highest rated MMA show in U.S. history with a 3.7 rating. With 6 million viewers, it was the 2nd most watched MMA match in U.S. history. Nelson would win Season 10 of TUF by defeating Brendan Schaub by KO in 3:45 of the very first round.

After winning Season 10 of TUF, Nelson would continue his winning ways by defeating Stefan Struve by KO in just 39 seconds. Big Country would then lose 3 of his next 4 fights. Losing by decision at the hands of former UFC HW Champions Frank Mir and Junior Dos Santos and highly respected BJJ practitioner Fabricio Werdum. In the midst of that 4 fight span, he defeated MMA and K-1 legend Mirko "Cro Cop" Filipovic via TKO at 1:30 of the 3rd round.

After losing to Fabricio Werdum, Nelson would go on a 3-fight winning streak defeating Dave Herman, Matt Mittrione, and Cheick Kongo by 1st KO/TKO, but would suffer another setback at the hands of Stipe Miocic via unanimous decision at UFC 161. Nelson was a -285 moderated favorite coming into that fight. Nelson had another tough test ahead of him when he took on former Olympic wrestler and undefeated Strikeforce heavyweight champion, Daniel Cormier, at UFC 166. He would come up very short in their fight due to Cormier's far superior wrestling which nullified Nelson's big right hand and he would lose a unanimous decision.  Both fighters had expressed interest in dropping to the 205 pound division after this fight.

Though highly criticized for his protruding gut and training practices, Roy Nelson is one of most popular and respected mixed martial artists in the UFC HW division. He may crack jokes with soundbites of how many cheeseburgers he will eat after he wins, but there is no doubt in anyone's mind that Big Country is one of the most talented and revered fighters in the world today.

The Ultimate Fighter 10 Finale Nelson def. Brendan Schaub by KO (Punch) at 3:45 of Round 1

Roy Nelson does a candid interview with Fight! Magazine.