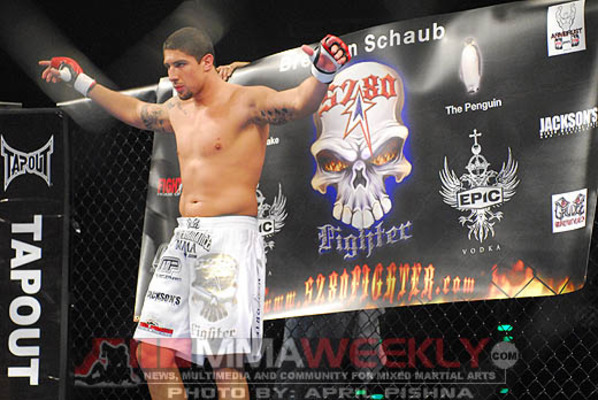 Brendan Schaub is ineligible for regional rankings due to inactivity.
Fighters must have at least one completed MMA bout in the past two years to be ranked.

A football player during his collegiate days, MMA fighter Brendan Schaub spent time playing for the Arena Football League after college and served on the practice squad for the Buffalo Bills before making the transition to mixed martial arts through Nate Marquardt’s high altitude training center in Denver, Colorado. After making his professional debut in 2008, Schaub reeled off four straight knockout wins before being invited to join the cast of the tenth season of The Ultimate Fighter reality show.

Episode 4 Schaub def. Demico Rogers by Anaconda Choke at 3:17 of Round 1

Although Schaub made it to the live finale in December of 2009, he was knocked out in the first round by IFL veteran Roy Nelson. He then rebounded with two straight first round knockouts. A powerful puncher with the size and weight to compete with the larger heavyweights in the division, Schaub has finished most of his professional opponents inside the first round. In 2010, Schaub separated himself from other prospects by defeating former top contender Gabriel Gonzaga. He went on to win his first Knockout of the Night bonus when he finished former Pride superstar Mirko "Cro Cop" Filipovic in the third round of their UFC 128 bout.

Following some time off, Schaub was set to face former UFC heavyweight champion Andrei Arlovski in his UFC return. At UFC 174, Schaub and Arlovski engaged in a relatively uneventful fight in which Schaub lost via split-decision. Some critics believe that Schaub won that fight.

Schaub was then expected to face a top-ten heavy weight in Travis Browne at UFC 181. Browne dictated the fight pass dropping Schaub and getting the TKO via ground and pound in the first round.