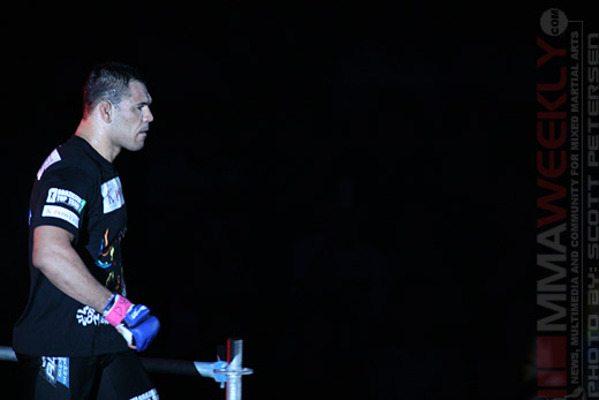 Antônio Rodrigo Nogueira is ineligible for regional rankings due to inactivity.
Fighters must have at least one completed MMA bout in the past two years to be ranked.

Known simply as "Minotauro," Antonio Rodrigo Nogueira began his storied mixed martial arts career in 1999, running his professional record to 6-0 before losing in the RINGS King of Kings Tournament Semifinal to Dan Henderson. Following the Henderson loss, Nogueira bounced back in the 2000 King of Kings Tournament and won five straight fights to take the title. Directly following the tournament, Nogueira entered the Pride Fighting Championships.

After entering the prime time Japanese promotion with little fanfare, "Big Nog" served notice that there was a new top contender in the mix, submitting Gary Goodridge and Mark Coleman with the most polished Jiu-Jitsu in the division. In his next bout, Nogueira won the Pride Heavyweight Championship, defeating "The Texas Crazy Horse" Heath Herring in an exciting bout in 2001.

Minotauro continued to build his name as one of the best heavyweights in the sport over the next five years, defeating the likes of Bob Sapp, Semmy Schilt, Dan Henderson, Mirko Filipovic (in a classic bout), Sergei Kharitonov, Fabricio Werdum, and “The Babyfaced Assassin” Josh Barnett during his run. Nogueira also participated in three high octane wars with the eventual consensus number one heavyweight in the world, Fedor Emelianenko, who seized Nogueira's belt in their initial matchup.

Following the collapse of Pride FC in 2007, Minotauro joined the UFC, where he rattled off wins over Heath Herring (again), Tim Sylvia, and Randy Couture. But the years of grueling wars in the ring had taken their toll on Nogueira, who seemed a step slower in some Octagon performances. The point was hammered home when a new young lion on the circuit, Cain Velasquez, knocked Nogueira out viciously in a display of superior handspeed and, perhaps, a changing of the guard.

One of the most successful and popular heavyweight fighters in MMA history, Nogueira is widely known for his incredible grappling and submission skills, having earned submission victories in 20 career wins. It is almost universally agreed that Minotauro has the best guard in the history of the heavyweight division. But alongside his grappling credentials, Nogueira became legendary for his ability to take punishment in a fight without being knocked unconscious or tapping out. Although that reputation took a hit when he was finished by Frank Mir and Cain Velasquez in the UFC. Minotauro remains one of the sport's most beloved fighters because of his “never say die” attitude and an ability, repeatedly demonstrated, to snatch victory from the jaws of defeat.

Despite being from Brazil, he had not fought in his home country until about his fortieth fight. However, he has been active in promoting non-UFC events in Brazil.

Born in the town of Vitória da Conquista, Brazil, Nogueira started training in judo at the age of 4, boxing at 14, and Brazilian Jiu-Jitsu when he was 18. He was run over by a truck when he was 11, and fell into a coma for 4 days. During this time he lost a rib and part of his liver and had to be hospitalized for eleven months. As a result of the accident he has a large scar, including a noticeable indentation, on his lower back. Minotauro's twin brother, Antonio Rogerio Nogueira (or "Little Nog"), is "Big Nog's" spitting image and a top fighter in his own right, competing at 205 lbs.

Big Nog signed on to coach opposite of Fabricio Werdum in the second season of the Ultimate Figher in Brazil and they would fight in a rematch at UFC on FUEL TV 10. Big Nog seemed to be doing well in the fight however he was caught in an armbar and was forced to submit to Werdum.

Antonio Rodrigo Nogueira discusses the accident that changed his life with Fight! Magazine.

Affliction profiled the legendary "Minotauro" Nogueira in this video.

A highlight video featuring Minotauro Nogueira entitled "Never Give Up."

MMA video maker Machinemen looks at Antonio Nogueira's best moments in Pride and the UFC in this highlight video.