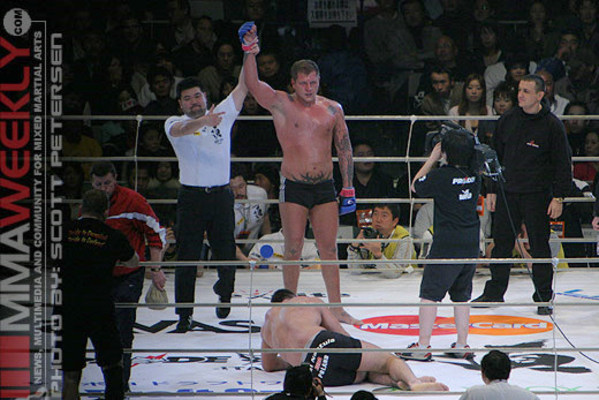 Often overshadowed by his older brother, the legendary Fedor Emelianenko, Aleksander Emelianenko has nevertheless established himself as a top notch MMA heavyweight capable of beating the best in the world. A gold medalist at the 2006 Sambo World Championships, Emelianenko made his professional MMA debut in 2003, and soon found himself in top tier battles with the likes of Mirko “Cro Cop” Filipovic, Josh Barnett, and Fabricio Werdum during an auspicious run in Pride Fighting Championships. Since his last fight for Pride FC against Sergei Kharitonov in 2006, Emelianenko has transitioned to fighting in various regional Russian promotions, most notably M-1 Challenge, and still maintains an active fight schedule.

Emelianenko is instantly recognizable in the ring for the enormous symbolic tattoos criss-crossing his body, including the large Grim Reaper on his back from which his nickname derives. Some of the tattoos symbolize time he spent in Russian prison for robbery, while others represent his redemption in the eyes of God.