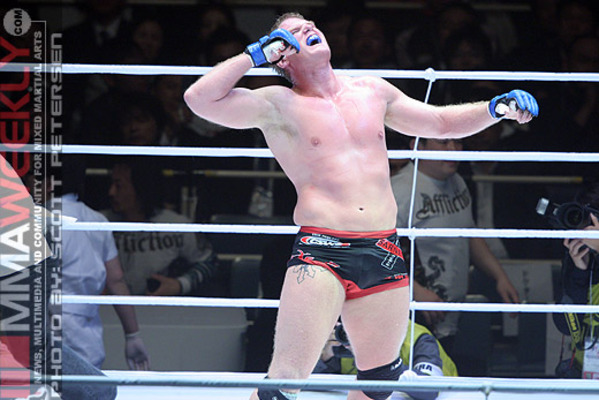 Josh Barnett is ineligible for regional rankings due to inactivity.
Fighters must have at least one completed MMA bout in the past two years to be ranked.

Josh Barnett was one of the youngest and brightest stars in MMA when he burst onto the scene in 1997, quickly running his professional record to 7-0 with a notable submission win over Dan Severn in February of 2000. Though he lost his second UFC fight to striking specialist Pedro Rizzo at UFC 30 in 2001, Barnett went on to become the UFC Heavyweight Champion, defeating Randy Couture by TKO at UFC 36 the next year. Barnett’s first public scandal with steroids took place after this fight, as he was stripped of his UFC title after testing positive for three banned substances.

Following his UFC career, Barnett became one of the most successful fighters overseas, defeating Yuki Kondo and Semmy Schilt (for the second time) and winning the Openweight King of Pancrase Championship in between. The articulate and extroverted “Babyfaced Assassin” would build a solid fan base over the next three years while competing for the Japan-based Pride Fighting Championships, defeating the likes of Kazuhiro Nakamura, Aleksander Emelianenko, Mark Hunt, Olympic Judo gold medalist Paweł Nastula and Antônio Rodrigo Nogueira during his stay.

While he has continued to win fights in recent years, Barnett’s reputation and position in MMA history was permanently compromised with another failed steroid test in 2009. This time, however, the results were disastrous, as the failed test prevented Barnett from participating in a scheduled main event title fight with heavyweight legend Fedor Emelianenko, and precipitated the collapse of the Affliction fight organization, which shuttered the entire event as well as its struggling fight promotion business shortly thereafter.

Beyond his technical striking, good size, physical toughness and tenacity, Barnett is first and foremost one of the best submission fighters in the heavyweight division, having won more than 50% of his professional fights by way of submission. Many feel that he has the potential to establish himself as one of the best fighters in the world yet again, should he be able to put his controversies behind him.

Barnett was riding a 6 fight win streak going into the Strikeforce Heavyweight tournament with notable wins over Jeff Monson, Gilbert Yvel and Pedro Rizzo (knocking the latter out in the rematch of their first fight). He would face off against Brett Rogers in the opening round of the tournament submitting him in the second round. He would also submit Sergei Kharitonov in the quarterfinals to punch his ticket to the finals where he would face off against Daniel Cormier. Barnett would have a 5 round battle with Cormier but ended up losing the decision after badly breaking his hand in the first 30 seconds of the fight, which required an immediate operation and kept him sidelined for the rest of 2012. There have been rumors that Pancrase would like him to defend his Openweight title but nothing has yet come to fruition. He was scheduled to take part in Strikeforce's last event by taking on promotional newcomer, Nandor Guelmino. To the surprise of no one, Barnett was able to finish the fight in the first round by submission.

Even though Barnett has originally declined to sign a new contract with the UFC, it was announced in May 2013, after several months of negotiations, that he had signed a new, multi-fight contract with the promotion. He would then face another former UFC champion and a heavyweight grappling specialist, Frank Mir on August 31 at UFC 164 in a fight that many fans had been asking for for a long time. He would make a triumphant return to the UFC finishing Mir in the very first round. Barnett next faced Travis Browne at UFC 168, but despite being considered a slight odds on favorite, he was knocked out in exactly one minute with several elbows to the side of the head from Browne while going for a takedown.

Outside of his fighting career Barnett has appeared in the Japanese Xbox 360 video game Beautiful Katamari. Video games being a big part of Barnett's hobbies; he mostly plays MMORPGs, such as League of Legends and World of Warcraft. As well as video games, Barnett regularly plays strategy the board/card games, mainly Magic the Gathering and Warhammer 40,000. Barnett also enjoy working on his car collection, that mainly contains vintage muscle cars. Barnett can often be seen side stage or even at times on stage with the Buffalo, N.Y.'s hardcore punk band Every Time I Die. He has even worked security for the band.

Interview  |  Josh Barnett: "The UFC Should be doing my laundry" report dead link

Josh Barnett gives his thoughts on the UFC in this video interview with Fight! Magazine.