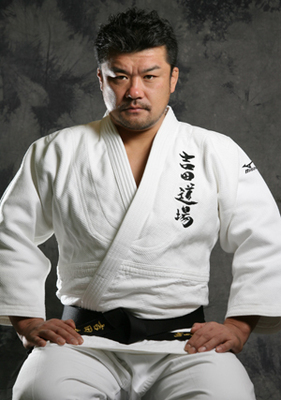 Hidehiko Yoshida is ineligible for regional rankings due to inactivity.
Fighters must have at least one completed MMA bout in the past two years to be ranked.

A Black Belt in Judo, beloved Japanese Judoka Hidehiko Yoshida rose to prominence long before making his professional mixed martial arts debut in 2002. After winning a gold medal at the 1988 Asian Championships in Judo, Yoshida went on to place in several World Championships before winning the gold in 1999. Yoshida’s crowning achievement in sport Judo came in 1992, when he won the gold medal at the Barcelona Olympic Games.

Already a national hero in Japan, Yoshida had his first MMA fight in 2002 for Pride Fighting Championships, defeating Don Frye with an Armbar in the first round. Throughout the next eight years, Yoshida was consistently one of Pride’s biggest draws, and would gamely compete against some of the best heavyweights of all time, often at a significant weight disadvantage. Yoshida defeated the likes of Tank Abbott, Mark Hunt, and Satoshi Ishii amidst losses to Wanderlei Silva (twice), Mirko Filipovic, and Josh Barnett. Perhaps his most memorable affairs were the pair of bouts he split against the legendary Royce Gracie, whom Yoshida was ruled to have choked out in their controversial initial encounter, which took place under modified rules and was not an official mixed martial arts bout. In their highly anticipated rematch, Gracie assumed control late in the fight and battered Yoshida for a number of minutes.

Yoshida retired from professional competition with a loss to Kazuhiro Nakamura in the main event of ASTRA on April 25, 2010. He was notable for wearing his traditional Judo gi throughout much of his career. He remains to this day the most successful Judoka to even compete in MMA, with 1 Olympic (-78kg) Gold Medal and 1 World Championship (-90 kg) Gold Medal to his name.