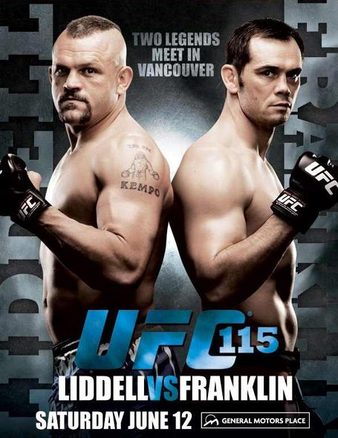 Tapology members can make predictions for upcoming MMA & Boxing fights. UFC 115 is closed for new predictions. 11 total members made predictions on this event, breaking down as follows below.

Leaderboard of the best predictions by member: UFC 115 Leaderboard

After losing four out of his last five fights, former Light Heavyweight Champion and Hall of Famer Chuck Liddell appeared to have fought his last battle inside the Octagon. But after Liddell campaigned hard for one more shot in the promotion, the call came from Dana White for "The Iceman" to coach opposite old rival Tito Ortiz on TUF 11. As is standard practice following the TUF season, the two would then battle it out in a third go inside the cage.

Liddell accepted and the season moved underway. Midway through the filming, however, Ortiz was forced to back out of the fight due to persistent neck and back problems. Rich Franklin, the UFC’s go-to guy for catch-weight and short notice bouts, stepped in and promptly knocked Liddell out cold in the first round of UFC 115. Following yet another KO loss, most believed Liddell's storied MMA career had, this time, truly come to an end.

Franklin impressed in the main event, as his left arm (his dominant side) was broken while blocking a Liddell kick, but he managed to rally and knock Liddell out with a short right hand. Liddell had looked extremely sharp in the fight, but once again showed a diminished ability to absorb a punch after one too many tilts in the cage. The real winners were the fans who were treated to the savage single-round affair.