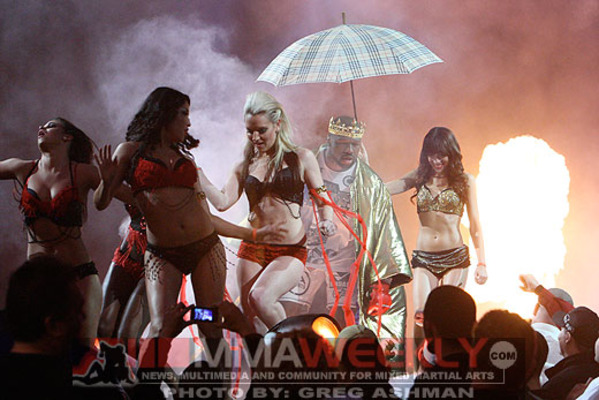 Muhammed Lawal is ineligible for regional rankings due to inactivity.
Fighters must have at least one completed MMA bout in the past two years to be ranked.

While “King Mo,” as he is known, has been making waves in the international MMA community in recent years, Muhammed Lawal’s first great athletic successes came during his collegiate wrestling career, where he was a Big 12 Champion and Division I All-American in 2003 while wrestling for Oklahoma State. Although he was a heavy favorite to win the gold medal in the 2008 Olympic Games, King Mo was upset by Andy Hrovat in the finals of the Olympic Trials, dashing his hopes of winning the gold.

King Mo has always been a colorful and exciting personality outside of competition, but he did not garner widespread attention until he surprised the collective MMA world by defeating heavily favored veteran Travis Wiuff on short notice in his first professional fight in 2008 at Sengoku 5 in Tokyo, Japan. Lawal would go on to win three more fights under the Sengoku banner before making his U.S. debut against Mark Kerr at M-1 Global: Breakthrough in August of 2009, winning the fight by knockout just 25 seconds into the first round and sending “The Smashing Machine’s” mouthpiece skipping across the canvas. Lawal made his Strikeforce debut four months later, defeating veteran heavyweight and light heavyweight fighter Mike Whitehead by knockout in the first round. Then, in the biggest test of his young career, King Mo fought and defeated highly respected European fighter Gegard Mousasi in Strikeforce, dominating the tilt with a slew of unstoppable takedowns and cool ground control against the skilled submission fighter. The win finally earned widespread praise and recognition for King Mo as one of the “next big things” in the MMA world.

King Mo would then lose his title Rafael Cavalcante being finished in the third round. He would bounce back with a win over Roger Gracie and Lorenz Larkin although the Larkin fight would be overturned to a No Contest when King Mo tested positive for Drostanolone. The positive test would earn him a 9 month suspension.

In 2012 Lawal would sign with Bellator Fighting Championship as well Total Nonstop Action Wrestling to pursue a career in MMA and professional wrestling at the same time. King Mo would make an impressive Bellator debut on January 24th in the Light Heavyweight tournament against Przemyslaw Mysiala. He finished Mysiala in the first round with a walk off Knockout. In the next round he would face Emanuel Newton in the semi finals. King Mo came out and looked like he wanted to keep the fight standing however he was leaving his hands down and got caught by a spinning back fist and eliminated from the tournament in a huge upset loss. He would bounce back with a devastating KO over Seth Petruzelli in the Main Event of Bellator 96. He got the take down and proceeded to land a monster right hand reminiscent of Fedor Emelianenko that put Seth instantly out. The win was the semi-final of the summer series so King Mo would then face Jacob Noe in the final. He would use his wrestling and dominate Noe the whole fight until he got the TKO finish in the third round at Bellator 97.

King Mo would get a chance to avenge his loss to Emanuel Newton when they faced off at Bellator 106 for the Interim title. However Mo would end up on the losing end of a Unanimous Decision. He would win his next fight against Mikhail Zayats in the semi finals of the tournament setting up a finals matchup against Quinton "Rampage" Jackson. He faced Quinton Jackson in the tournament final for a title shot. He lost the fight via unanimous decision.

Lawal was again expected to face Tom DeBlass on November 15, 2014 at Bellator 131. However, on November 1, it was announced that Deblass had suffered a cut during training and had to withdraw from the bout. Lawal eventually faced Joe Vedepo. He won via TKO due to punches in the third round.

Lawal faced Cheick Kongo in a Heavyweight bout on February 27, 2015 at Bellator 134. He won the fight by split decision.

Documentary  |  "The Year of the Mo, Pt.1 - Training" by All Elbows report dead link

Documentary  |  "The Year of the Mo, Pt. 2 - Growing Up" by All Elbows report dead link

The All Elbows video team brings us this video introduction to "King Mo" Lawal in three parts. Part 2 focuses on King Mo's maturation into a pro MMA fighter..

The All Elbows video team brings us this video introduction to "King Mo" Lawal in three parts. Part 3 focuses on King Mo's preparation for his debut MMA fight.

LayzieTheSavage brings us this Muhammed Lawal highlight video featuring clips from Fight! Magazine, photos from All Elbows, and more.