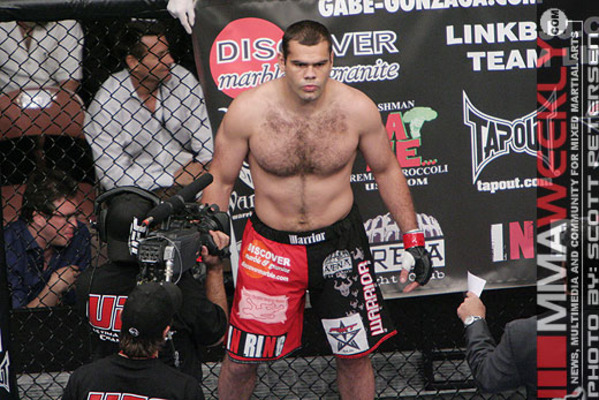 Gabriel Gonzaga is ineligible for regional rankings due to inactivity.
Fighters must have at least one completed MMA bout in the past two years to be ranked.

UFC heavyweight veteran Gabriel “Napao” Gonzaga has seen his share of highs and lows inside the Octagon. He entered the promotion with a vaunted Jiu-Jitsu pedigree, a 2004 Mundials winner and an Abu Dhabi grappling veteran. That, his size and strength, and a frightening ability to knock opponents out both standing and on the ground, led to some serious hype in Gonzaga’s early goings in the promotion. The pinnacle of his career – and a heavyweight title shot – came as a result of his April 2007 fight with Mirko “Crocop” Filipovic, whom many expected to finish “Napao” with a patented head kick. The tables were turned in stunning fashion when it was Gonzaga who knocked out Filipovic with one of MMA’s all-time greatest head kick finishes, a grisly KO in which the Croatian challenger collapsed unconscious onto his own knee, buckling it and requiring surgery thereafter.

Unfortunately for Gonzaga, he looked rattled and unsure of himself in the championship tilt four months later against Randy “The Natural” Couture at UFC 74, who used superior cagemanship and savvy to smother Gonzaga’s offense, press him against the cage, bloody him and eventually pound him out with strikes on the ground. Since that disappointment, Gonzaga has assumed more of a gatekeeper role in the division, showing flashes of his previous brilliance but also paving the way for ferocious young lions such as Shane Carwin and Junior Dos Santos, who both built their names with impressive KOs of the Brazilian. Gabriel Gonzaga now lives and trains out of Ludlow, Massachusetts. Following a decision loss to Brendan Schaub he was released from the promotion. He would fight once for Reality Fighting defeating Parker Porter to claim the heavyweight title. He would then get his shot back in the UFC against Ednaldo Oliveira who he would submit in the first round. He has been scheduled to face Roy Nelson, Shane Del Rosario and Geronimo Dos Santos but all of those bouts were cancelled.

Instead he would face and submit Ben Rothwell before losing by TKO to Travis Browne. He would however bounce back with a quick 17 second knockout over Dave Herman at UFC 162 and then just three months later score another massive KO over a dangerous slugger Shawn Jordan in just 1:33. His 2 fight win streak however would be ended when he faced Stipe Miocic in the Co-Main Event of UFC on Fox 10. Miocic was able to stuff Gonzaga's take down attempts and Miocic would cruise to a Unanimous Decision victory.