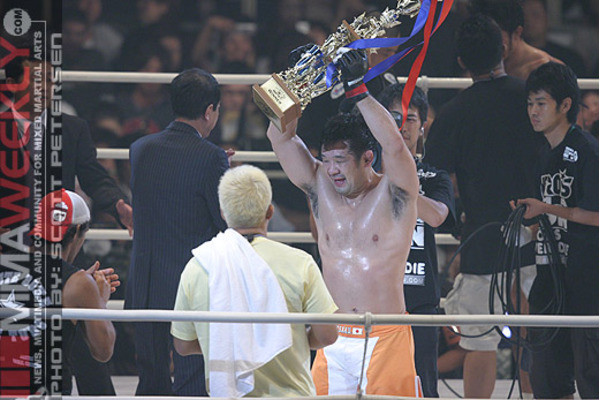 Kazushi Sakuraba is ineligible for regional rankings due to inactivity.
Fighters must have at least one completed MMA bout in the past two years to be ranked.

Known as the legendary “Gracie Hunter,” Japan’s Kazushi Sakuraba was one of Pride Fighting Championships’ all-time greatest mixed martial arts fighters, and came to epitomize Japanese martial artists’ warrior ethos and “never say die” fighting mentality. At his peak in and around 2000 many regarded him as the world’s best fighter. In recent years, the damage accumulated in dozens of classic MMA wars has slowed and at times hobbled Sakuraba, but he remains among MMA’s most beloved figures, an ambassador and elder statesman of the game and an embodiment of the fighter who fights for the love of competition. Sakuraba is MMA royalty.

Kazushi Sakuraba’s MMA career spans more than two decades, with a fight resume dotted with many of the most fearsome individuals ever to step into a ring or cage. He has defeated many of MMA’s best, including Carlos Newton, Vitor Belfort, Quinton “Rampage” Jackson and Kevin Randleman, but it was his quartet of classic victories over Royler Gracie, Royce Gracie, Renzo Gracie and Ryan Gracie in 1999 and 2000 that established him as the “Gracie Hunter” and made him the newfound figurehead for the fledgling Pride organization. The site of Sakuraba, adorned in the colorful masks and guises of various Japanese anime, superhero and video game characters, thronged by cheering fans, marching down the ramparts into the Pride ring to do battle yet again, remains one of MMA’s most iconic sights.

Some of Sakuraba’s defeats are as memorable as his greatest victories, based on his refusal to give in and, in some instances, the horrible beatings he endured as a result. Losses to Ricardo Arona in 2005 (where he sustained so much damage that he was observed being carried out of Saitama Super Arena on a stretcher) and Melvin Manhoef in 2008 were particularly gruesome, and it was his trio of violent losses to the ferocious Brazilian Wanderlei “The Axe Murderer” Silva beginning in 2001 that signalled a changing of the guard in MMA, as a new class of size, strength and athleticism emerged among its elite combatants.

Sakuraba was born in Katagami, Akita, Japan in 1969 and still lives, trains and fights professionally out of Japan.

Kazushi Sakuraba came to America for only the second time in his career,  to compete at Metamoris V.  a invitation only, submission only, 1 round, 20 minute event. He and Renzo Gracie fought to a draw on Nov.22 2014

Robbie Park returns to follow up on his original classic highlight video of Kazushi Sakuraba in this Sakuraba 2.0 video.

A highlight video paying tribute to the legendary Kazushi Sakuraba.

A highlight video of Kazushi Sakuraba's battles with the Gracie family.