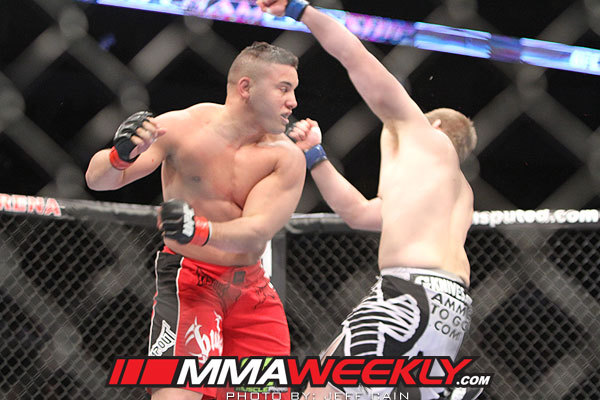 #61
Greatest MMA Striker of All Time

Pat Barry is ineligible for regional rankings due to inactivity.
Fighters must have at least one completed MMA bout in the past two years to be ranked.

Patrick Barry, a UFC heavyweight fighter known for his explosive striking power, began his professional fighting career in the ring rather than the cage, compiling a professional kickboxing record of 18-6 before transitioning to mixed martial arts in 2008. Barry won his first four MMA bouts, including one in the UFC, before getting caught in a first-round submission during his UFC 98 bout with Tim Hague. Following the loss to Hague, Barry defeated one-time training partner and rival kickboxer Antoni Hardonk by TKO in the second round. Barry was then choked out by a personal idol of his, Mirko Filipovic, in their UFC contest after controlling the action in the early going.

Although he has been working on his ground game since transitioning to MMA, Barry is quickly establishing himself as one of the most feared strikers in the UFC. More impressive than his power, however, is the fact that Barry stands only 5’11” and weighs in on the lower end of the heavyweight range, making him one of the smallest fighters in the division.

Barry’s nickname, “HD,” means “Hype or Die,” a playful reference to the hype he has received from his fans since joining the UFC in 2009. Prior to his matching Fight of the Night and Knockout of the Night bonuses gained in his win over Hardonk, Barry was nearly evicted from his living space and did not have any food the week before the fight.

On January 28, 2014, Barry released a statement on his official Facebook account announcing an indefinite leave from mixed martial arts. Barry cited his lack of enthusiasm for the grappling aspects of the sport and hinted at a desire to get back to his roots. Given the re-ignition of professional kickboxing with GLORY Kickboxing's move to Spike TV in 2013, it's possible he could seek out a home with the striking-based promotion.