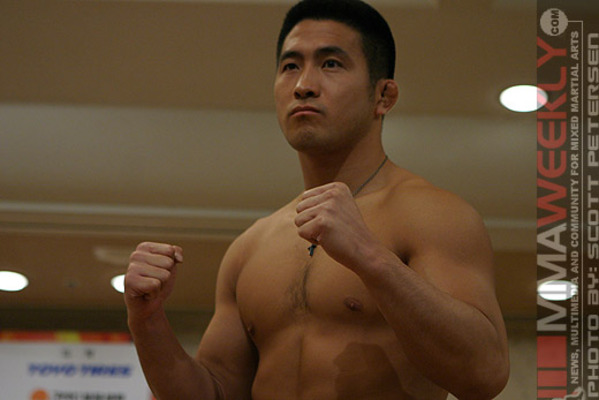 Shungo Oyama is ineligible for regional rankings due to inactivity.
Fighters must have at least one completed MMA bout in the past two years to be ranked.

Oyama has fought at Heavyweight and Light Heavyweight but is currently a Middleweight. He holds a black belt in Judo. He has fought in KOTC, Pride, ROTR, K-1 Hero's, Dream, Pancrase, and Road FC. Despite his mediocre record he has beaten many name fighters and is one of only four fighters to defeat two Gracie's. His notable wins include Rodrigo Gracie, Carlos Newton, Valentijn Overeem, Renzo Gracie, Brian Gassaway and Denis Kang.

Probably the highlight of Oyama's MMA career was the ROAD FC Middleweight Tournament in 2012. He had a little momentum coming in but was still considered a sizable underdog. In the opening round he drew PRIDE and UFC veteran Denis Kang, Oyama would pull off the upset and ride the momentum to 3 straight 1st round victories, the tournament championship, and the ROAD Middleweight title.

In addition to the ROAD title, Oyama is the former Martial Combat Light Heavyweight champion . He has also fought for the Middleweight King of Pancrase but lost to Ryo Kawamura.

After a 1-5 stretch of brutal losses, Oyama announced he would be having his retirement bout and ceremony at Pancrase 263. He again was brutally finished by Yuji Sakuragi.

Oyama was a student of Judo great Hidehiko Yoshida. He has also trained with Bas Rutten and at the famed Takada Dojo.