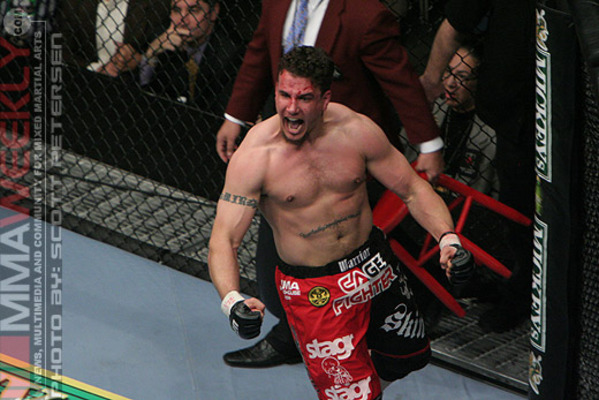 Frank Mir is ineligible for regional rankings due to inactivity.
Fighters must have at least one completed MMA bout in the past two years to be ranked.

Frank Mir made his professional mixed martial arts debut in 2001 and worked his way into the UFC that same year, defeating Pete Williams with an inside shoulder lock in his fourth fight. After suffering the first defeat of his career to Ian Freeman in 2002, Mir rebounded with four straight victories. He took the UFC Heavyweight Championship in a major upset over Tim Sylvia at UFC 48 in 2004, breaking the defending champion’s arm in the process. Although he was lauded as the best heavyweight in the world after the win, tragedy struck the same year when Mir was involved in a horrific motorcycle accident on September 17, 2004 that broke his femur and tore all of the ligaments in his knee. His return to the cage would come two years later when the not-fully-recovered Mir disappointed fans by losing to Marcio Cruz by TKO in the first round, and repeated the dismal performance against surging young star Brandon Vera later that year.

After being written off by many, Mir came back healthier, stronger and more focused in 2007-2008 to win three straight fights over Antoni Hardonk, Brock Lesnar, and Antonio Rodrigo Nogueira to win the Interim Heavyweight Championship, proving that his return back from the accident had been rushed. Mir was the first man to ever finish the legendary “Minotauro” Nogueira. However, Nogueira later claimed he had been suffering from a staph infection, leading to bad blood between the two men.

Predominantly known for his expert-level ground skills—especially off of his back—in a division where Brazilian Jiu-Jitsu black belts are relatively less common, Mir has evolved his stand-up in recent years to rival that of anyone in the heavyweight division. He duplicated his finish of Nogueira with strikes in 2008 by knocking down French kickboxer Cheick Kongo with a hard left hand in 2009 and finishing him off on the ground. He also is the  only fighter to ever win a fight by toe hold submission in UFC history.

One of the most talented trash-talkers in the sport, Mir is one of the best in the world at selling a fight, often at the expense of his opponent’s personal dignity. He was also embroiled in one of the most famous feuds in MMA history with WWE import Brock Lesnar, settling on a 1-1 record with the heavyweight behemoth when the dust cleared. The articulate Mir is also an accomplished MMA sportscaster, having called many of the WEC’s live events on cable.

After dropping a fight to Shane Carwin he would go on a three fight win streak with victories over Mirko Cro Cop, Roy Nelson and a come from behind Submission of the Night in a rematch over Antonio Rodrigo Nogueira. The Cro Cop fight had been so uneventful however, that even though it was the only knockout that night it did not receive a "Knockout of the Night" bonus. The Nelson fight was also a letdown, but the Nog clash was a thriller. Nogueira was able to stun Mir with punches, but had after a series of submission reversals, Mir was able the break the Pride veteran's arm with a kimura.

This was enough to earn Mir the title shot against Junior Dos Santos but he would fall short in his attempt losing by TKO in the second round. He attempted to take down the UFC champion several times, but was unsuccessful, before being knocked out by the champions superior striking.  He was then supposed to fight the Heavyweight Gran Prix winner in Strikeforce, Daniel Cromier. The bout with Cormier was expected to take place on November 3, 2012 at Strikeforce: Cormier vs. Mir However, on September 19 it was revealed that Mir suffered an injury in training and was forced to pull out of the match up.  The bout was then rescheduled for UFC on Fox 7.   Mir lost the uneventful fight by unanimous decision.  Next Frank would welcome Josh Barnett back to the UFC on August 31st, UFC 164: Henderson vs Pettis 2. Mir was unable to deal with the striking of Barnett and would end up on the losing end of a TKO in the first round for his third straight loss. He would end up losing his next fight as well against Alistair Overeem at UFC 169. The loss would make his fourth in a row so it remains to be seen what will happen with the former champ.

After a year layoff Mir would get back in the cage against Antônio Silva as the main event at UFC Fight Night 61.  The year layoff ultimately proved to help Mir's body recover immensely as he would go on to knockout Silva in under two minutes in round one, elevating him back into the Heavyweight title picture.  Following this win over Bigfoot Silva, Mir would then take on UFC returnee Todd Duffee at UFC Fight Night 71 in San Diego in the main event.  Despite coming in as an underdog, Mir would make quick work of Duffee and finished him with a KO victory in under a minute and a half in round one.  This two fight win streak would put him just fingertips away from getting another shot at the UFC Heavyweight title.  In order to get that title shot, however, Mir would need to beat another resurgent Heavyweight fighter in fellow former champion Andrei Arlovski at UFC 191 in Las Vegas.  What many thought would be an exciting brawl between two former champions going all or nothing for a shot at the title would end up becoming a drag out decision that saw both men not engage very much.  This inactivity from Mir would ultimately cost him as Arlovski would pick up the victory via unanimous decision, despite many pundits and UFC president Dana White scoring the fight in favor of Mir.

Not wanting to fall out of the title picture, Mir would accept a fight offer against another top 10 heavyweight and former PRIDE vet in Mark Hunt at UFC Fight Night 85 in Brisbane.  The fight would ultimately not go Mir's way as he would get knocked out in one punch by Hunt three minutes into round one.  The knockout would only be the least of Mir's worries as he would get red flagged by USADA after a fight day sample showed Mir tested positive for turinabol.  Mir denied ever taking the substance in question and would sit out the rest of 2017 until he would be granted release from his UFC contract, ending his 16 year stint with the promotion.

Following his release, Mir would then sign on with Bellator MMA and was announced as one of the eight participants in the Bellator Heavyweight Grand Prix where he would take on legendary Heavyweight fighter Fedor Emelianenko in the quarterfinals at Bellator 198.  Mir would ultimately lose the fight by TKO in the first round.

Frank Mir discusses his rivalry with Brock Lesnar in this video interview with Fight! Magazine.