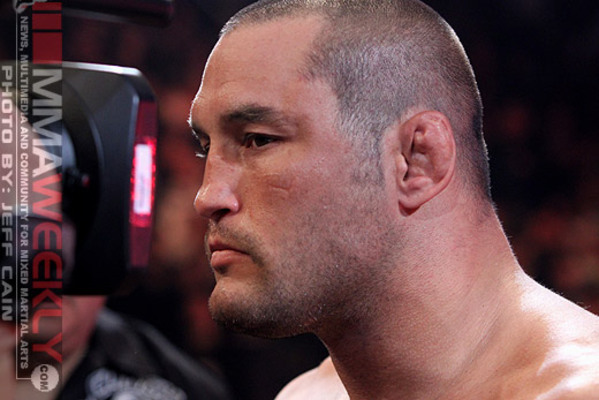 Dan Henderson is ineligible for regional rankings due to inactivity.
Fighters must have at least one completed MMA bout in the past two years to be ranked.

Dan Henderson was born in Downey, California and grew up in Apple Valley, California. Henderson competed in Folkstyle, Freestyle and Greco-Roman wrestling, but is best known for his accomplishments in Greco Roman.

After high school Henderson delayed pursuing a college wrestling career, instead deciding to focus on Greco Roman. However, he would go to wrestle a season each at Cal State Fullerton (CSUF) and Arizona State University (ASU). He qualified for the 1993 NCAA championships.

Henderson missed becoming a 3 time Olympian in 2000. The U.S. was instead represented by Quincey Clark. Henderson made it to the 2001 world team trials finals, but was defeated in the championship match by Matt Lindland, who had recently moved up a weight class, and who would go on to win a silver medal in the World Championships. After this, Henderson decided to dedicate his focus to his MMA career. He is notable for the fact that for the first 13 fights of his MMA career, he was juggling his time between MMA and Wrestling, and still found success in both.

Henderson, one of the most experienced and respected veterans in the sport, began his fighting career back in 1997 when he competed in and won the Brazil Open 1997 Lightweight Tournament. “Hendo,” as he is often referred to, then entered the UFC and went on to win the UFC 17 Middleweight Tournament in 1998. An even bigger accomplishment followed the next year when he defeated four men, including Gilbert Yvel, Antonio Rodrigo Nogueira, and Renato “Babalu” Sobral en route to winning the 1999 RINGS King of Kings Tournament, a little-remembered tournament that nonetheless ranks as one of the toughest ever organized.

Henderson did not truly begin his legacy, however, until he entered the Japan-based Pride Fighting Championships in 2000, where he went on to defeat notable fighters such as Renzo Gracie, Murilo Bustamante (twice), Vitor Belfort, and Wanderlei Silva, winning the promotion’s coveted 183 lb. and 205 lb championship belts before it ceased operations in 2007. Henderson then moved on to the UFC, defeating the likes of Rich Franklin and Michael Bisping before signing with the California-based Strikeforce promotion in 2009.

In his debut fight for Strikeforce in April of 2010, Dan Henderson was a heavy favorite going into his Middleweight title fight against champion Jake Shields. Despite knocking Shields down twice in the first round, Henderson lost decisively via decision. After his huge upset loss to Jake Shields, Henderson claimed that the weight cut to 185 lb. had become to much for him, and caused him to fatigue. He then stated he would only fight at middleweight again if it were for a rematch with Anderson Silva.

Henderson then moved up to 205 lbs where he began one of the most storied runs of his career. First was his knock out Renato Sobral, and then captured the Strikeforce Light-Heavyweight Championship, defeating Rafael "Feijao" Cavalcante via 3rd round knockout. This made Dan Henderson the first fighter to win 3 major titles in 2 promotions (PRIDE FC and Strikeforce). In the final fight of his contract, Henderson fought at heavyweight against former PRIDE Heavyweight Champion Fedor Emelianenko and arguably one of the greatest fighter of all-time, where he won via knockout in an upset.

Henderson resigned with the UFC where he was greeted with a fight against PRIDE Grand Prix Champion Maurico "Shogun" Rua. In what some regard as the greatest fight of all-time, Henderson claimed a controversial decision over Rua and a title shot against champion Jon Jones. The the fight with Rua, "Hendo" was able to floor Rua early in their fight, and then control the next three rounds before seemingly running out of gas. "Shogun" was able to win the fourth round, before mounting Henderson through most of the fifth, punishing "Hendo" severely but unable to score the knockout. There was a lot of debate after the fight on whether the fifth round should have been scored 10-8, which would have made the fight a draw.

Nine days prior to UFC 151 (where he would face Jones) , Henderson pulled out of the fight with Jon Jones, thus indirectly causing the cancellation of the event, the first time in the promotion's history. He would instead face former UFC Light Heavyweight Champion, Lyoto "The Dragon" Machida at UFC 157 losing by Split Decision. He would follow that loss with another Split Decision loss this time at the hands of Rashad Evans at UFC 161.

Dan Henderson has a TUE (or therapeutic use exemption) for testosterone due to his declining testosterone levels. Although TRT/TUE is not recognized as unlawful by state athletic commissions, the use of TRT has been controversial and one of the most discussed topics in the MMA world whether fighters should be allowed to use it or not. He has also benefited from several close and disputable decisions, namely against Carlos Newton, Alan Goes, his first fight with Sobral, Murilo Rua, Yuki Kondo,  Antonio Rodrigo Nogueira, and Rich Franklin.

Dan Henderson can claim legendary status in a sport he has helped define with his gutsy performances, his determination to win, his elite Greco-Roman wrestling ability, his one-punch knockout power and his legendary ability to take a punch.

Dan Henderson would lose his third straight fight when he faced off against Vitor Belfort at UFC Fight Night 32 in Brazil. It would also be the first time in his long career that he was finished by TKO when Belfort landed a head kick and followed up with some ground and pound. Henderson would bounce back and end his 3 fight skid when he faced off against Shogun Rua in a rematch. Henderson was almost finished in the first round but managed to survive that and another knock down in the second round. He come out in the third and managed to land a shot and follow it up for the TKO finish. It would earn him the Performance of the Night as well as the Fight of the Night bonuses.