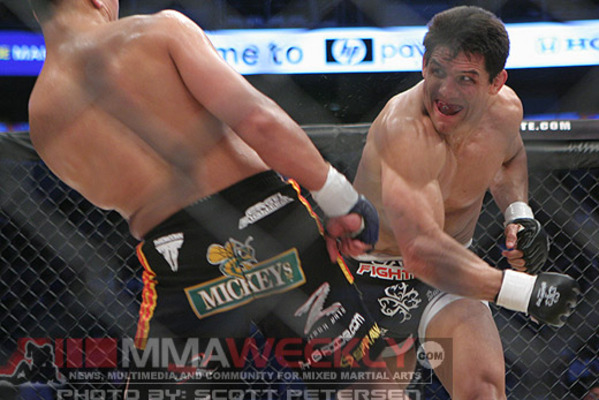 #43
Greatest MMA Fighter of All Time

Frank Shamrock is ineligible for regional rankings due to inactivity.
Fighters must have at least one completed MMA bout in the past two years to be ranked.

Easily one of the most experienced veterans in the sport’s short history, former UFC Light Heavyweight Champion Frank Shamrock first began competing in MMA in 1994 for the Pancrase organization, defeating the likes of Bas Rutten and Vernon “Tiger” White and running his professional record to 14-7-1 before debuting for the UFC in 1997. In only his first UFC fight, Shamrock fought for and won the UFC Light Heavyweight Championship, beating Kevin Jackson with an Armbar. He would go on to defend his title four times over the next year, submitting veteran Jeremy Horn with a Kneebar before earning the most high-profile win of his career with a come-from-behind performance over Tito Ortiz via fourth round submission (strikes) in 1999. At that, the high water mark of his fighting career, Frank Shamrock was considered by many the number one pound-for-pound fighter in the world.

After the Ortiz fight, Shamrock remained only partly active in fighting. He defeated Cesar Gracie, and Phil Baroni in an entertaining tussle, before joining the California-based Strikeforce promotion. But injuries mounted, and age crept up on Shamrock. Following a loss to Cung Le, and a domination at the hands of the younger, bigger Californian Nick Diaz, Shamrock finally announced his retirement on June 26, 2010 at the Strikeforce: Fedor vs. Werdum event, where he was given a rousing ovation inside the cage.

Shamrock was trained by his older brother Ken Shamrock in the art of submission fighting, eventually growing to love the sport and joining the Japan-based Pancrase organization, where he fought a trilogy of bouts with the great Bas Rutten. Shamrock will be remembered as one of the first fighters to display an “all around” MMA game, bringing striking, clinching and submission prowess to the cage together in an era still dominated by single-sport specialists. Shamrock was a savvy fighter and an even more savvy entertainer whose ability to generate hype for his fights almost singlehandedly kept Strikeforce afloat through its infancy.

Watch this video of MMA legend Frank Shamrock retiring from MMA in 2010.

A video look at the lead up to Frank Shamrock's retirement speech at Strikeforce.