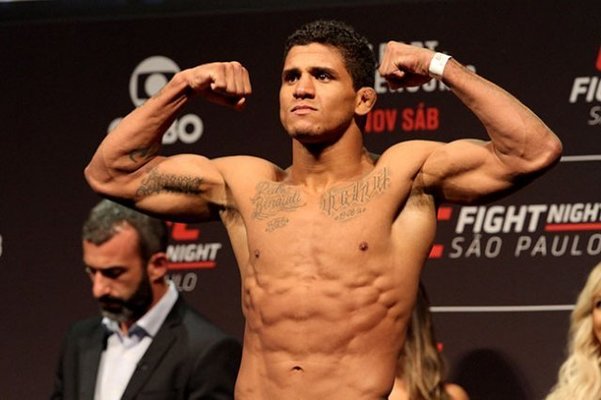 Fighting for a major organization has made Gilbert Burns ineligible for regional rankings.

Gilbert Burns (born July 20, 1986), is a Brazilian-American mixed martial artist and grappler. He is the older brother of UFC fighter Herbert Burns and he currently competes in Ultimate Fighting Championship (UFC). As of March 7, 2020, he is #6 in the UFC welterweight rankings. When Burns was young, his father offered to fix his customer's car in trade for three months of jiu-jitsu lessons for all of his boys. Burns started training at the Academia Associação Oriente, an affiliate of Nova Uniao led by Welton Ribeiro. He trained with Nova Uniao until the 2007 World Championship, where he came in second place. In 2009, Burns became recognized when he won the silver medal at the World Jiu-Jitsu Championship. In 2010, Burns attained a high level of international success competing worldwide. He reached the semifinals of the European Open in January; he defeated heavy favourite Celso Venicius at the World Pro Cup trials; he won the World Cup finals in Abu Dhabi against Claudio Mattos; and he won the Brazilian Nationals in May. In 2011, Burns achieved his highest recognition as he won the gold medal in the 2011 World Brazilian Jiu Jitsu Championships. In 2015, Burns won bronze at Abu Dhabi Submission Wrestling championships (ADCC). After winning the 2011 World Brazilian Jiu Jitsu Championships, Burns decided to make MMA his focus. He made his professional MMA debut in January 2012. In 2012, Burns was chosen by UFC fighter Vitor Belfort to be the head grappling coach for Team Vitor on first season of The Ultimate Fighter: Brazil. Burns made his debut on July 26, 2014 at UFC on Fox 12, replacing an injured Viscardi Andrade against promotional newcomer Andreas Stahl. He won the fight by unanimous decision. Burns faced promotional newcomer Christos Giagos in a lightweight bout on October 25, 2014 at UFC 179. He won the bout via submission in the first round. The win also earned him his first Performance of the Night bonus award. Burns was expected to face Josh Thomson on March 21, 2015 at UFC Fight Night 62. However, on February 26, Thomson pulled out of the fight with an undisclosed injury, and was replaced by Alex Oliveira. After arguably dropping the first two rounds, Burns rallied to win the fight via submission in the third round. This win also earned him his second straight Performance of the Night bonus. Burns was expected to face Norman Parke on May 30, 2015 at UFC Fight Night 67. However, Burns pulled out of the fight due to injury in late April and was replaced by Francisco Trinaldo. Burns faced Rashid Magomedov at UFC Fight Night 77 on November 7, 2015. He lost the first fight via unanimous decision, marking his first loss in his MMA career. Burns next faced Łukasz Sajewski on July 7, 2016 at UFC Fight Night 90. He won the fight via submission in the closing seconds of the first round. Burns faced Michel Prazeres on September 24, 2016 at UFC Fight Night 95. He lost the fight via unanimous decision. Burns was scheduled to meet Paul Felder on February 11, 2017 at UFC 208. However, Burns pulled out of the fight in mid-January citing injury. Burns faced Jason Saggo on September 16, 2017 at UFC Fight Night 116. He won the fight via knockout in the second round. In the beginning of November 2017, Burns stated he had signed a new, four-fight contract with UFC. Burns was scheduled to face Olivier Aubin-Mercier on February 24, 2018 at UFC on Fox 28. However, on February 21, 2018, both Burns and Aubin-Mercier were pulled from the card, as promotional medical team deemed Burns would be unsafe to meet lightweight upper limit of 156 Ibs limit upon his arrival at the fight week. Burns was linked to a fight with Lando Vannata on April April 14, 2018 at UFC on Fox 29. However, the pairing never materialized as Vannata was unable to accept the fight for this date/event as he was still rehabilitating a recent arm injury, instead Burns was scheduled to face newcomer Dan Moret in this event. He won the fight via knockout one minute into the second round. Burns faced Dan Hooker on July 7, 2018 at UFC 226. He lost the fight via knockout in the first round, being finished for the first time in his MMA career. The bout with Olivier Aubin-Mercier was rescheduled and eventually took place on December 8, 2018 at UFC 231. Burns won the fight by unanimous decision.  Burns was expected to face returning veteran Eric Wisely on April 27, 2019 at UFC Fight Night: Jacaré vs. Hermansson. However, it was reported on April 18 that Wisely pulled out of the bout, citing injury. He was replaced by newcomer Mike Davis. Burns won the fight via rear-naked choke submission in the second round. Burns returned to the welterweight facing Alexey Kunchenko on August 10, 2019 at UFC on ESPN+ 14, replacing injured Laureano Staropoli. He won the fight via unanimous decision, marking Kunchenko’s first loss in his career. Burns stepped in as a late replacement to face Gunnar Nelson, on September 28, 2019 at UFC on ESPN+ 18. He won the fight via unanimous decision. As the first fight of his new, four-fight contract, Burns faced Demian Maia on March 14, 2020 at UFC Fight Night 170. He won the fight via technical knockout in round one. This win earned him the Performance of the Night award. Burns is scheduled to face Tyron Woodley on May 30, 2020 at UFC Fight Night 176.