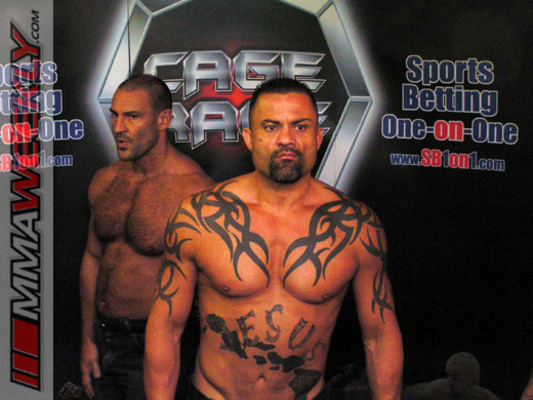 Kimo Leopoldo is ineligible for regional rankings due to inactivity.
Fighters must have at least one completed MMA bout in the past two years to be ranked.

Kimo Leopoldo made a lasting impression on the collective MMA consciousness upon his debut at UFC 3 in 1994. Leopoldo was introduced as a Taekwondo Black Belt and walked into the cage bearing a massive wooden cross in reverence to his Christian faith. He was defeated by Royce Gracie in the first round, after putting up what was arguably the toughest fight of Gracie’s early UFC career. Kimo would continue to be a prominent and attention-getting fighter throughout the early days of the UFC.

Although Kimo lost to some high-level fighters of his time, including Ken Shamrock (twice), he defeated Patrick Smith (twice), Tank Abbott, and fought to a draw with Dan Severn in 1997 in a fight that lasted 30 minutes.

In July of 2009, a report surfaced that Leopoldo had died at age 41 due to complications from a heart attack. At a press conference held that week, Leopoldo appeared in person quite alive, putting the false rumors to rest.