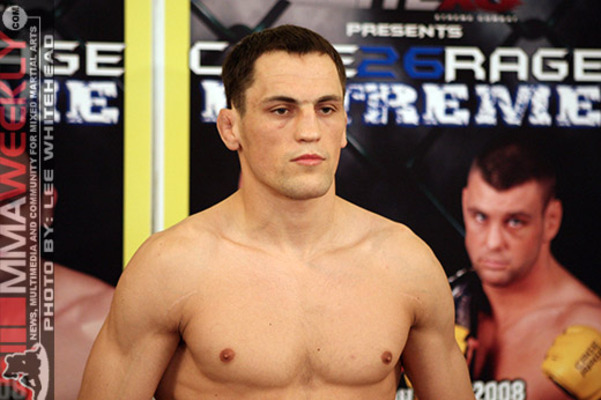 Fighting for a major organization has made Marius Žaromskis ineligible for regional rankings.

After spending the majority of his early career fighting for the King of the Cage and Cage Rage promotions, Lithuanian striker Marius Zaromskis caught his big break when he was invited to compete in the 2009 Dream Welterweight Grand Prix. After defeating Seichi Ikemoto by Unanimous Decision in the First Round, Zaromskis shocked the MMA world by delivering back-to-back head kick knockouts over Hayato Sakurai and Jason High to become the first-ever Dream Welterweight Champion.

Although Zaromskis’s stock rose considerably with his tournament win, his pair of first-round knockout losses to Strikeforce fighters Nick Diaz and Evangelista “Cyborg” Santos put a quick damper on his ascendancy, and arguably weakened the reputation of the Dream welterweight division in the process.

An exceedingly aggressive fighter, Zaromskis has drawn frequent comparisons to Croatian MMA legend Mirko Filipovic, as he continuously looks for knockouts utilizing his straight punches and head kicks. Known for his striking flare, Zaromskis  turned heads after he knocked out opponent Bruno Carvahlo with a devastating somersault kick at Rumble of the Kings 6 in Stockholm.

His first two fights in Bellator were against Waachiim Spiritwolf. The two had previously met in Strikeforce but the fight was declared a no contest after Spiritwolf received a quick eye poke and was unable to continue. Their first Bellator fight also ended in an unusual manner. After a heated two round battle, the fight was called off and Zaromskis was declared the winner due to cuts. Spiritwolf had a cut on his forehead, but it did not appear to be bad enough to warrant the stoppage. The two met again two months later and Zaromskis was able to take a split decision in another exciting fight.

His two wins earned him a spot in Bellator's Season 7 Welterweight tournament. His quarterfinal round fight was against Nordine Taleb. Zaromskis was able to earn another win in a close unanimous decision against the Bellator veteran. His semifinal fight will be against Andrey Koreshkov at Bellator 78.

Zaromskis lost his fight against Koreshkov by knock out at 2.14 minutes of the first round.

At Bellator 86 Zaromskis faced Brent Weedman and lost a close decision. At  Bellator 119 Marius took on Vaughn Anderson, Zaromskis had to win to ensure his place on the Bellator roster. Zaromskis won the fight by decision with his customary aggressive