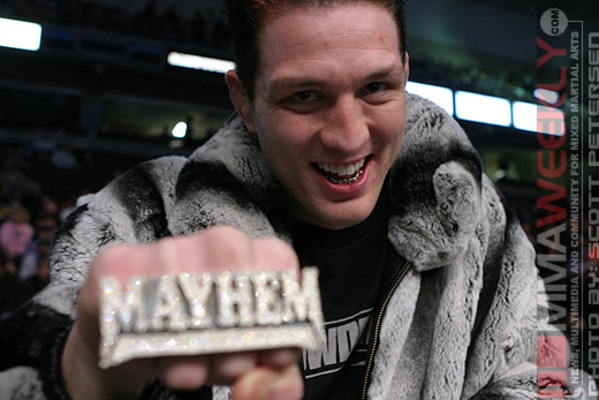 Jason Miller is ineligible for regional rankings due to inactivity.
Fighters must have at least one completed MMA bout in the past two years to be ranked.

After a difficult childhood, which consisted of moving to and from a variety of army bases around the Unites States, Jason Miller took an interest in mixed martial arts and began competing professionally in 2001. After putting together a solid record of 12-3 while competing predominantly in the welterweight division, Miller made his UFC debut in 2005 against future UFC Welterweight Champion Georges St. Pierre, losing a Unanimous Decision. Following the loss, Miller left the UFC and pursued a career in smaller organizations such as ICON Sport and Strikeforce, now competing in the middleweight division and defeating notable fighters such as Robbie Lawler and Tim Kennedy along the way.

In April 2010, Miller was involved in the now infamous Strikeforce: Nashville brawl. Miller had entered the ring after Jake Shield's victory to challenge him to a rematch, inciting the Diaz brothers and Gilbert Melandez to attacked Miller, starting a brawl. The incident has been called "one of the worst black eyes" in the history of the sport.

Aside from his experience fighting some of the best welterweight and middleweight fighters of his generation, Miller is known for his colorful, entertaining, and sometimes controversial personality both in and out of the fight game. Miller received his nickname, “Mayhem," because of his ability to drum up trouble and controversy, and he can often be seen smiling or laughing during fights even if he is losing badly. Miller has gained a widespread following among MMA fans, as well as a new generation of teens following his hosting of the MTV show “Bully Beatdown.” Mayhem’s fans have come to be known as “Miller’s Monkeys.” Despite his antics, Miller is a skilled grappler and a stern test for even the top fighters in his division.

After his 2010 bout with Kazushi Sakuraba, "Mayhem" Miller had been reportedly approached by the UFC. After several weeks of negotiation, Miller had officially signed and was waiting to receive his first bout in his return to the company. It was later announced that Miller would be facing Aaron Simpson in a middleweight bout at UFC 132. This bout did not come to fruition as Miller was pulled to fill in as a coach on season 14 of the Ultimate Fighter opposite of Michael Bisping.

At the TUF 14 finale, many believed Miller won the first round due to takedowns and defensive movements from Bisping. However the tide would change rapidly after the first round as Bisping would go on to win via TKO in the third round.

Following his loss to Bisping, Miller was scheduled to face CB Dollaway at UFC 146. Despite rocking Dollaway several times, Miller was inhibited by what seemed to be a knee injury during the bout. Dollaway used his dominant wrestling to neutralize Miller's jiu-jitsu in route at a unanimous decision loss for Miller.

Following the loss at the UFC 146 post-fight media scrum, Dana white had revealed that Jason Miller was to be cut and will never fight again in the UFC. The reason behind this is linked to Miller engaging in an altercation with UFC caretake Burt Watson following his UFC 146 bout. Also several fans had complained about Miller's behavior in Vegas following that same bout. Miller revealed that he had blown out his knee leading up to the fight with Dollaway and "couldn't afford" to reschedule their fight.

Following his release from the UFC, Miller has faced legal problems with being arrested twice in 2012 for an altercation with his sister and for defacing a church naked. That same year, Miller was on the MMA hour with journalist Ariel Helwani to promote a movie he was a small role in, "Here Comes the Boom". Miller refused to exit his character's personality in the movie "Lucky Patrick" and went on to storm off the set. In August 2013, Miller was once again arrested for a domestic disturbance. In October 2014, Miller engaged in a serious standoff with LAPD and SWAT members for several hours.

The All Elbows video team happened to catch Jason Miller's reaction to his character on the EA Sports MMA video game.

The All Elbows video team brings us this behind the scenes look at Jason "Mayhem" Miller's training with "Babalu," Rob Kaman and others.