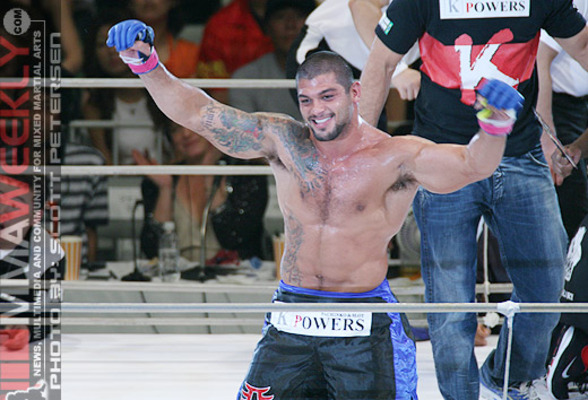 #39
Greatest MMA Grappler of All Time

Ricardo Arona is ineligible for regional rankings due to inactivity.
Fighters must have at least one completed MMA bout in the past two years to be ranked.

Though his fighting schedule has decreased dramatically in recent years, longtime Brazilian Top Team member Ricardo Arona, known as “The Brazilian Tiger,” is still recognized as one of the top 205 pounders in the world. Blessed with extraordinary strength and an Atlas-like physique, Arona combines world class level Jiu-Jitsu with a double-leg takedown ability rarely seen outside of top tier wrestlers from the United States. His ground ability and ferocious competitiveness have led him to wins over some of MMA’s finest combatants, including Dan Henderson, Wanderlei Silva and Alistair Overeem. Arona placed one of the worst beatings in MMA history on fighting legend Kazushi Sakuraba in their matchup at Pride Critical Countdown 2005 before Sakuraba’s corner threw in the towel, and though Arona lost a contest to future heavyweight great Fedor Emelianenko in a 2000 Rings King of Kings affair, the margin was razor thin and some fans to this day contend that “The Brazilian Tiger” won the fight.

Arona’s losses, though rarer, have often been equally memorable. His knockout loss to Quinton “Rampage” Jackson via slam will be replayed for as long as there is video. Losses to Mauricio Rua and Sokoudjou were also dramatic. Born in 1978, Arona remains a young man and has hinted at returning to frequent, high level MMA bouts. Until he does so, however, fans will have to wonder if there remains more to add to the talented Brazilian’s fighting legacy.

Another highlight video looking at "The Brazilian Tiger" Ricardo Arona's best moments in the ring.