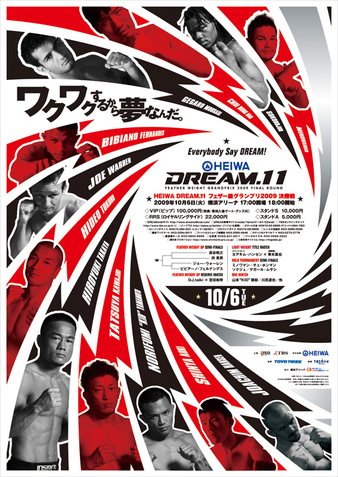 Tapology members can make predictions for upcoming MMA & Boxing fights. Dream 11 is closed for new predictions. 13 total members made predictions on this event, breaking down as follows below.

Leaderboard of the best predictions by member: Dream 11 Leaderboard

In another mega-event for the small Japanese promotion, Dream 11 featured the Semifinals and Finals of the 2009 Featherweight Grand Prix, with Bibiano Fernandes coming out with the title after submitting Joe Warren in the Semifinals and winning a close Split Decision over Hiroyuki Takaya in the Finals.

In the Dream Super Hulk Tournament, Ikuhisa Minowa and Rameau Thierry Sokoudjou advanced to the Finals with wins over Hong Man Choi and Bob Sapp, respectively. Gegard Mousasi had earned a spot in the Semifinals, but was forced to withdraw from the tournament due to injury. Sapp took his place.