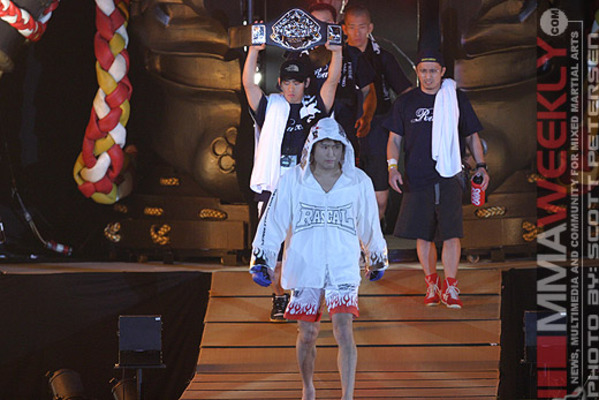 Takanori Gomi is ineligible for regional rankings due to inactivity.
Fighters must have at least one completed MMA bout in the past two years to be ranked.

For much of his MMA career, Kanagawa, Japan’s “Fireball Kid,” Takanori Gomi, was considered the world’s best lightweight mixed martial arts fighter. During a sensational 2004-2005 run that saw him notch wins at Pride Bushidos 2, 3, 4, 5, 7, 8, and twice at the Bushido 9 tournament, Gomi delivered some of the greatest knockouts the division had ever seen, and became the biggest star in the promotion. His spectacular knockouts of Luiz Azeredo at Pride Bushido 7 and Hayato Sakurai at Pride Shockwave 2005 were among the most memorable.

Born in 1978, Gomi began boxing at the age of 16, and within two years had begun training freestyle and catch wrestling at Japan’s Kiguchi Dojo. Gomi joined Japan’s famed Shooto gym at the age of 19, and at 20 launched his mixed martial arts career. For a man who later became known as one of the division’s best knockout artists, Gomi was initially thought of as a ground fighter and grappler, and won the majority of his early contests by decision or submission.

Gomi’s great run in Pride began in 2004, when he joined the promotion on the heels of disappointing back-to-back losses to lightweight greats Joachim “Hellboy” Hansen and “The Prodigy,” BJ Penn. Having now developed his boxing skills to a high level, Gomi put his hands to use in the Pride ring. In what would become his trademark fighting style, Gomi would weather an early storm from an aggressive opponent, then begin to chop the house down with withering straights and hooks to the body. By the latter half of Pride’s opening 10 minute round Gomi’s foe would be laboring and noticeably slowed. Only then would “The Fireball Kid” move in to finish him off, typically with strikes either standing or from an advanced ground position. Gomi defeated many of Pride's best, including Tatsuya Kawajiri and Hayato Sakurai.

Gomi’s highly anticipated initial foray into the UFC Octagon resulted in a setback, when perennial top contender Kenny “Kenflo” Florian outboxed the great boxer and finished him with an RNC. In his next Octagon bout against Tyson Griffin at UFC on Versus II, Gomi reminded fans why he was ranked the best in the world only a few short years ago, starching Griffin with a picture-perfect right cross to end the fight in the first round. Gomi became the first man to finish Griffin inside the distance. In short, Gomi’s star still burns bright, and legions of fans are hoping for a return to the form that placed him among the world’s very best.

Gomi would drop his next two bouts by submission to Nate Diaz and Clay Guida before bouncing back with a TKO over Eiji Mitsuoka in the second round of their fight at UFC 144. Gomi next faced Mac Danzig at UFC on Fuel TV 6 in Macau, China where he won by split decision. He would then drop his next bout by Split Decision to Diego Sanchez.

A HL video focusing on Gomi's best moments before the UFC and Pride.

Filmmaker Hero1, aka Oliver Sha, is the creator of this Takanori Gomi highlight vid featuring "The Fireball Kid's" best fights.

MMA highlight film maker Genghis Con puts together this stellar package of "Fireball Kid" knockouts and other highlights from the career of Takanori Gomi.