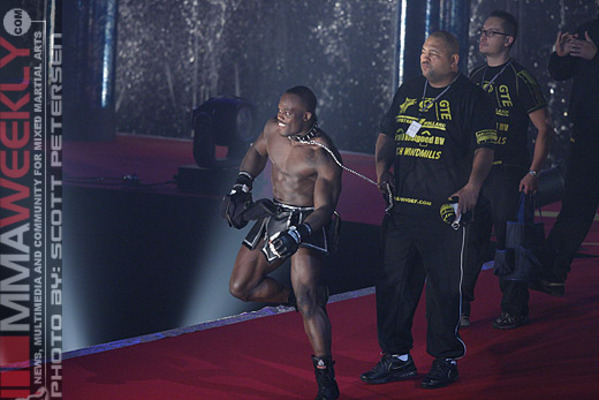 Fighting for a major organization has made Melvin Manhoef ineligible for regional rankings.

One of the most explosive middleweight strikers in the world of professional MMA, Melvin Manhoef first gained recognition in the professional kickboxing realm, where he holds notable career victories over Stefan Lenko, Ramazan Ramazanov and many others. Manhoef’s first real success in mixed martial arts occurred in 2005, when he defeated Paul Cahoon to win the Cage Rage Light Heavyweight Championship with a first-round TKO. After winning the title, Manhoef would add several prominent names to his victims list over the next several years while competing in Europe and Japan, including Evangelista “Cyborg” Santos, Kazushi Sakuraba, whom Manhoef delivered a vicious beating to, Mark Hunt, whom Manhoef knocked out for the first time, and Kazuo Misaki.

Manhoef’s strengths and weaknesses in the cage are clear. He is an elite striker with a sometimes suspect ground game. When fighters fail to steer the contest away from Manhoef’s strengths, they often wake up looking up at the arena lights. Throughout the duration of his MMA career, Manhoef has been to a total of only two decisions, finishing almost all of his fights by knockout or TKO. He is also known for an entertaining ring and cage entrance in which he is literally unleashed by his trainers from a dog collar around his neck.

On October 6th 2012, Melvin Manhoef fought Ryo Kawamura at ONE FC: Rise of Kings. At the end of the first round Manhoef landed a vicious right hand that knocked Kawamura out cold.

Manhoef would then fight Denis Kang at DREAM 18, in what would be the promotion's swan song. Manhoef blitzed Kang, defeating the Pride veteran via TKO in only 50 seconds.

Manhoef's victory over Kang would be his last win for almost a year and a half. He suffered back to back losses in 2013, first to Brock Larson at ONE FC: Kings and Champions on April 5. Larson would defeat Manhoef via unanimous decision. Manhoef then lost again to Mamed Khalidov at KSW 23 via guillotine choke.

Manhoef would bounce back with wins in his first two bouts of 2014. He first defeated Evangelista "Cyborg" Santos at Gringo Super 10 on April 27, 2014 via TKO only 46 seconds in the first round. Manhoef then bested Doug Marshall at Bellator 125, winning via KO.

Manhoef's last two appearances in Bellator have both been winless. First, Manhoef suffered a shocking KO upset to Joe Schilling at Bellator 131. Manhoef was heavily favored coming into the fight, as Schilling had only competed four times in MMA, with a then record of one win and three losses. Manhoef then fought former Bellator middleweight champion Alexander Shlemenko on February 13, 2015 at Bellator 133. Manhoef was knocked out early into round two, but the result was later overturned to a No Contest when Shlemenko tested positive for elevated levels of testosterone.

After that, Manhoef was scheduled to fight Hisaki Kato at Bellator 146. Kato was coming off of an upset KO victory over Joe Schilling and was favored to win the fight, but Manhoef ended up winning the back and forth affair with a left hook knockout. That victory granted him a title shot against current Bellator middleweight champion Rafael Carvalho, the two are scheduled to meet on May 20, 2016 at Bellator 155.