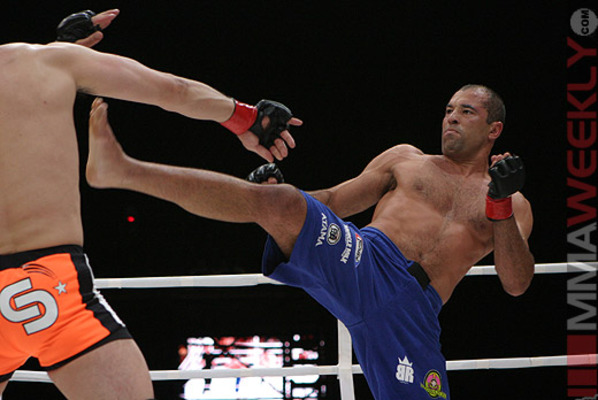 Royce Gracie is ineligible for regional rankings due to inactivity.
Fighters must have at least one completed MMA bout in the past two years to be ranked.

Remembered today as the greatest early pioneer of mixed martial arts, Brazilian Jiu-Jitsu master Royce Gracie arrived on the NHB fight scene as a small, underweight curiosity from Rio de Janiero, Brazil. At the behest of UFC co-founder Rorion Gracie and other family members, Royce entered the inaugural UFC, or “Ultimate Fighting Championship,” a fledgling, borderline barbaric no-holds-barred fighting tournament held in Denver, Colorado in 1993. What ensued was the stuff of legend.

The slim and undersized Gracie dominated the tournament, going undefeated over the course of three fights against larger, more muscular opponents to become the first-ever UFC champion. In his first match, Gracie submitted boxer Art Jimmerson in the second round. Then he faced MMA pioneer and future UFC Hall of Famer Ken Shamrock in the semi finals and submitted him via rear-naked choke within a minute. In the final, Royce fought Karate and Savate practitioner Gerard Gordeau and submitted him in less than two minutes as well. More importantly, Gracie opened the eyes of millions of North Americans to the opaque, exotic potency of ground fighting, choking out his confused and often helpless adversaries with subtle techniques the audience and fight announcers failed to grasp.

Gracie would go on to repeat the feat one year later, winning the UFC 2 tournament with four straight submission victories, bringing his overall winning streak to seven in a row with all seven contests ending by submission. Gracie was forced to withdraw prior to a scheduled bout with journeyman Harold Howard at UFC 3 due to injury after defeating Kimo Leopoldo the same night, but Gracie would again be declared the UFC champion at UFC 4 the same year when he defeated Ron Van Clief, Keith Hackney, and wrestling standout Dan Severn all in one night. As a result of his unparalleled Ultimate Fighting Championship success, Gracie – and the so-called “Gracie” Jiu-Jitsu which bore his family’s name – had forever changed the world of martial arts.

Standing just over 6’ tall and weighing in around 170 lbs., Gracie shocked early MMA fans with the calm, collected manner he maintained during some of the most grueling fights in the sport’s history. In a era before time limits, gloves, or rules for the safety and protection of the fighters, Gracie's accomplishment stands as much as a feat of bravery as a feat of skill. Although future opponents such as Matt Hughes eventually showed that a new breed of athletic, well rounded fighter had passed him by, he remains one of the foremost figures in mixed martial arts history. Gracie was recognized for his accomplishments on November 21, 2003 at UFC 45, when he became the first fighter ever inducted into the UFC Hall of Fame.

A 6th Degree Brazilian Jiu-Jitsu black belt, Gracie remains one of the fighters cited most often by today’s MMA athletes as their inspiration for entering mixed martial arts. His ninety minute battle with the great Kazushi Sakuraba in Pride is still remembered as one of the great fights in MMA history. He and his extended family are responsible for the widespread fame and success of Gracie Jiu-Jitsu and submission grappling throughout the world. Royce Gracie continues to travel the world and teach.