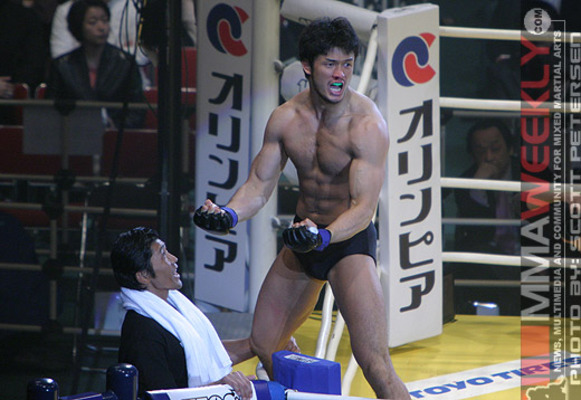 Katsuyori Shibata is ineligible for regional rankings due to inactivity.
Fighters must have at least one completed MMA bout in the past two years to be ranked.

Katsuyori Shibata is a profesisonal wrestler and mixed martial arts fighter. He was born on November 17, 1979 in Kuwana, Mie, Japan. Shibata has always had a background in combat sports as his father Katsuhisa Shibata is a former professional wrestler in New Japan Pro-Wrestling and Japan Pro-Wrestling Alliance and referee.  Shibata also has a background in amateur wrestling as he wrestled on a national level in high school.

Shibata made his professional wrestling debut on October 10, 1999. In the early part of his career, like every other young up and coming wrestler, Shibata received the Young Lion treatment wrestling in opening card fights and losing constantly. Shibata showed a lot of potential though. During his time in New Japan, Shibata opposed Hiromi Amada in a kickboxing fight in a New Japan ring. Hiromi knocked him out In the second round. Shibata also made his mixed martial arts debut while being a New Japan wrestler as he defeated Webster Dauphney at Jungle Fight 2 in Brazil on May 15, 2004.

In 2005 Shibata left New Japan and he began wrestling namely in Big Mouth Loud where he and Kazunari Murakami were the top dogs and where he fought various big name Japanese wrestlers such as Satoshi Kojima and Kensuke Sasaki. In NOAH, Shibata mostly fought in tag team matches teaming up with KENTA.

In January 2007, Shibata left professional wrestling as a whole completely to focus on his mixed martial arts training solely. Shibata made his mixed martial arts return on March 12, 2007 at HERO’S 8 where he successfully TKO’d Yoshihisa Yamamoto.  Shibata continued competing in HERO’S where his set back began after he was submitted by Ralek Gracie with an armbar at HERO’S 9.

After the loss to Ralek at HERO’S 9, Shibata went on a long losing streak. In that losing streak, Shibata fought in HERO’S, DREAM and DEEP. Shibata’s losing streak came to an end at DREAM 8 where he fought Ikuhisa “Minowaman” Minowa. In the fight Shibata showed signs of improvement and made it seem as if he was going to break out even hitting Minowaman with a German suplex in the fight.

After defeating Minowaman, Shibata then fought wrestler Tokimitsu Ishizawa who is also known as Kendo Kashi at DREAM 12. Shibata’s picked up another win as he defeated Ishizawa by TKO in the first round.

Shibata then hit another set back in his professional mixed martial arts career, That set back began when he lost a unanimous decision to Hiroshi Izumi at Dynamite!! 2009. After the loss to Izumi, Shibata returned to DEEP where he continued losing fight to Young “RYO” Choi and Yoshiyuki Nakanishi. Shibata then fought Japanese 2012 Olympic Summer Games gold medalist Satoshi Ishii at the K-1 World MAX 2008 World Championship Tournament. Ishii however pulled a win over Shibata by submission in the first round with a kimura. After the loss to Ishii, Shibata fought against Ryuta Sakurai at DEEP 55 IMPACT in his last MMA fight to the moment where again Shibata suffered defeat losing to Ryuta by TKO in 3:04 of the second round.

After a while of inactivity, Shibata returned to professional wrestling with fellow Japanese MMA fighter Kazushi Sakuraba as his tag team partner forming the tag team of LAUGHTER 7 in IGF and then in New Japan Pro-Wrestling.