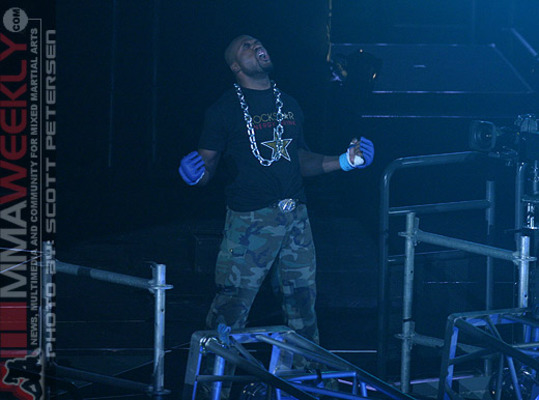 Quinton Jackson is ineligible for regional rankings due to inactivity.
Fighters must have at least one completed MMA bout in the past two years to be ranked.

Hailing from Memphis, Tennessee, Jackson had his first taste of combat sports as a wrestler for Raleigh-Egypt High School, where he won All-State honors. Originally, Jackson intended to become a professional wrestler after graduating high school, but ultimately extended his amateur career at the junior college level. After discovering mixed martial arts, Jackson trained in Las Vegas with BAMMA fighter Lewis Rumble.

Jackson was a junior college amateur wrestler before entering the world of professional MMA, but it would be his natural blend of raw strength and stunning knockout power that would help to build him into one of the most intimidating fighters in the light heavyweight division for over a decade. Though he depended on natural talent and power in his early days, Jackson has worked with renowned MMA trainers and coaches in recent years to improve his skillset, including the U.K.-based Wolfslair MMA Academy, and has made noticeable improvements in his striking accuracy and conditioning.

Quinton Jackson started fighting professionally in 1999 and ran his record to a standout 10-1 before debuting for Japan's Pride Fighting Championships in 2001. Although he lost his debut fight to Japanese legend Kazushi Sakuraba via Rear Naked Choke, Jackson made a name for himself in the bout with a crowd-pleasing showcase of reckless abandon, repeatedly slamming “The Gracie Hunter” to the canvas in an awesome display of power. It would prove to be a coming out moment for one of MMA's brightest stars. “Rampage” subsequently established himself as a true talent at 205 lbs., and an enormous crowd draw. He collected dominant victories over Kevin Randleman, Murilo Bustamante, Chuck Liddell, and Ricardo Arona over his next three years in Pride, utilizing his trademark slams and powerbombs to end more than one bout, along with a very heavy pair of fists.

Following the collapse of Pride and a stint outside of a major promotion, Rampage made his long-awaited debut in the UFC in 2007 with a knockout win over Marvin Eastman, the first man to ever defeat him. Jackson then took the UFC Light Heavyweight Championship from longtime champion Chuck Liddell, defeating him for a second time, before successfully defending the belt against Pride champion Dan Henderson the same year unifying the 205 pound title. When the UFC 205 lb. belt changed hands from Liddell to Jackson, the mantle of the UFC's biggest star arguably changed hands as well. Jackson would begin to enjoy the crossover fame in popular culture that few other fighters besides Liddell and Randy Couture possessed.

Rampage would coach The Ultimate Fighter 7 opposite Forrest Griffin and would lose in a close upset in 2008, but would follow up with a devastating KO in a rematch with nemesis Wanderlei Silva. He would follow that up with a win over Keith Jardine. Even without a championship belt, Jackson has continued to increase his popular appeal in recent years, and is one of the most successful MMA athletes in the world in business and entertainment ventures outside of the cage. Jackson landed a starring role in 2010’s remake of The A-Team, in which he played B.A. Baracus, the role previously held by Mr. T.

Rampage would again end up coaching again for The Ultimate Fighter 10 this time against Rashad Evans. There was lot's of bad blood between the two and in the end Evans would get the better of Rampage winning a decision. Rampage would pick up wins over Lyoto "The Dragon" Machida and Matt "The Hammer" Hamill earning him a title shot against Jon "Bones" Jones a bout in which Jackson would end up being submitted in the 4th round. He would drop his next two fights to Ryan Bader and Glover Teixeira. He would then announce issues with the UFC publicly and ask to be released from his contract.

Rampage has now signed on with Bellator and would win his first two fights by TKO over Joey Beltran and Christian M'Pumbu. The win over M'Pumbu was the semi final match up of the Light Heavyweight tournament so with that win Rampage will now square off against  Muhammed "King Mo" Lawal in the finals. Jackson faced Muhammed Lawal in the tournament final for a title shot on May 17, 2014, at Bellator 120. He won the fight via unanimous decision.