"The World's Most Dangerous Man" 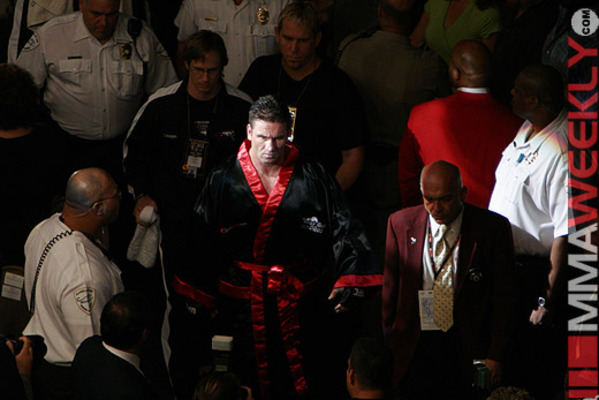 Ken Shamrock is ineligible for regional rankings due to inactivity.
Fighters must have at least one completed MMA bout in the past two years to be ranked.

Ken Shamrock is a trailblazer of the sport. Before he entered the volatile world of professional mixed martial arts competition, “The World’s Most Dangerous Man” made his name among fanatical Japanese fans in a series of Pancrase Hybrid Wrestling competitions from 1993-1996, using a set of rules that were somewhat restrictive in comparison to modern MMA. Eventually, Shamrock began competing in the UFC full-time, where he would quickly become one of the most respected and popular fighters in the company’s first decade.

After losing the UFC 1 tournament to MMA legend and fellow UFC Hall of Famer Royce Gracie in 1993, Shamrock went on to defeat notable contemporaries Dan Severn and Kimo Leopoldo (twice). He also graced the Pancrase and Pride Fighting Championships organizations.

Outside of his battles with Royce Gracie, Shamrock is best known by modern MMA audiences for his lengthy feud with former UFC light heavyweight champion Tito Ortiz, which was popularized on the third season of the highly successful Spike TV reality show The Ultimate Fighter. Shamrock lost three fights to Ortiz—all of them by stoppage—from 2002-2006, and increasingly struggled against a younger breed of fighters, as typified in his loss to a young Rich Franklin before a large television audience.

Despite waning success, the camera-ready combatant from The Lion’s Den fight team could be relied upon for his entertaining pre-fight build-ups, a heavy dose of old-school machismo, and the muscled physique lay fans would expect of a man who fights in a cage for a living. Those traits, plus the recognizable “Shamrock” name, have earned him continuing widespread renown.

Although Shamrock was more than willing to stand and trade strikes in many of his fights, he was predominantly known as a submission fighter with a mastery of leglocks; 23 of his 27 career wins came by way of submission.