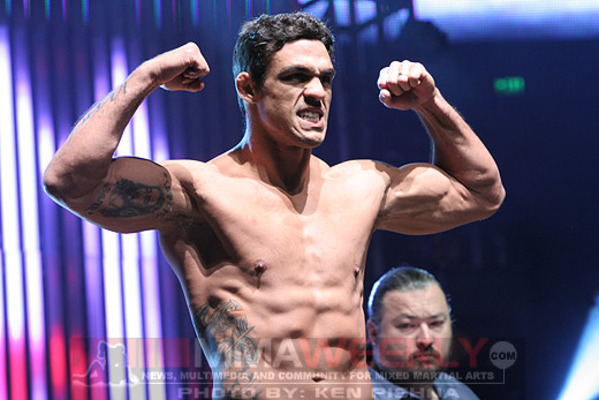 Vitor Belfort is ineligible for regional rankings due to inactivity.
Fighters must have at least one completed MMA bout in the past two years to be ranked.

Vitor Belfort is a Brazilian light heavyweight fighter currently signed to the UFC.  For a short while before he entered in the UFC< he went by the name of Vitor Gracie.  He holds a black belt in Gracie Jiu Jitsu and trains out of the Blackzilian camp in Florida. During his long and successful career, he has fought for the UFC, Pride, Cage Rage, Strikeforce and Affliction. He holds notable wins over Tank Abbott, Wanderlei Silva, Gilbert Yvel, Heath Herring, Marvin Eastman, Randy Couture, Matt Lindland, Yoshihuro Akiyama and Michael Bisping. He was the UFC 12 tournament winner and later went on to win the UFC Light Heavyweight title and the Cage Rage championship. Vitor has also won the UFC's "Knockout of the Night" bonus five times during his career with the promotion. Outside of MMA, he has a professional boxing record of 1-0 and placed third in the 2001 ADCC absolute division. Of his twenty three wins, nineteen have been finishes including sixteen T/KOs. He has not had a fight go to decision in over six years and all of his loses have come to current or former champions from Strikeforce, Pride, or the UFC.

A black belt in Brazilian Jiu-Jitsu under Carlson Gracie, Vitor Belfort was expected to be a savvy and cautious grappler when he first debuted in the UFC in 1997 at the tender age of 19. Fortunately for him—and unfortunately for his opponents—Belfort proved right away that he had a natural affinity for knockouts. He became the youngest fighter in UFC history to score a victory after flattening Tra Telligman at UFC 12. Two more quick knockout victories would follow in the UFC, prompting fans and promoters to label Befort “The Phenom,” a moniker that would prove both apt and premature all at once.

Belfort suffered the first setback of his career at the fists of UFC Hall of Famer Randy Couture, losing by TKO at UFC 15, and while he had his fair share of triumphs in the years that followed—including winning the UFC Light Heavyweight Championship with a controversial TKO (due to a lacerated eyelid) over Couture in 2004—Belfort also suffered disappointing losses to Chuck Liddell, Tito Ortiz, Alistair Overeem, and Dan Henderson both before and after winning the title. After his lose to Henderson, he tested postive for elevated levels of testosterone. He claimed that it had been due to either tainted supplements or an injection from his doctor to help heal an injured knee. On December 21, 2006, the Nevada State Athletic Commision banned him from competition for nine months and fined him $10,000 for the incident. During this time, he went to London, England to compete in two fights for the Cage Rage promotion and was able to win their Light Heavyweight title.

In 2007, after rededicating himself to the sport that built his name, a reinvigorated Belfort put together an impressive winning streak with a knockout of bruiser Terry Martin, a particularly vicious knockout of veteran Matt Lindland, who lay prone on the canvas for a frighteningly extended period following the barrage, and a pinpoint KO combination on former UFC Middleweight Champion Rich Franklin upon his return to the UFC in 2009.

After Belfort beat Rich Franklin he was given a title shot against middleweight champ Anderson Silva. Belfort would suffer a loss in the form of a brutal front kick knockout in the first round to the champ. Belfort would follow up his loss with a 1st TKO over Yoshihiro Akiyama in a Knockout of the Night and then by submitting Anthony Johnson in the1st round at UFC 142. The UFC was then trying to find a fight for Jon Jones and Belfort stepped saying he would move back up a weight class and he really wanted this fight. Belfort would come close to dethroning the 205 pound champ in the 1st round when he sunk in an armbar that looked like it might finish Jones. Jones however held on and was able to finish Vitor instead by submission in the 4th round.

Belfort returned to the middleweight division against British fighter Michael Bisping at UFC on FX 7 where he would finish him with a head kick for the Knockout of the Night. He would follow that win up with a victory over former Strikeforce champion Luke Rockhold. He would end this fight in spectacular fashion as well when he landed a beautiful wheel kick and was able to finish Rockhold with punches earning himself a second straight Knockout of the Night bonus.

Belfort at his best is a coiled dynamo of accurate, concussive punching power and quickness. His standup prowess has propelled him to countless highlight reel knockout victories, including often-replayed dispatchings of Wanderlei Silva, Marvin Eastman, and Tank Abbot in his earlier days. Vitor Belfort is proof positive that quick-twitch muscles can’t be taught, and that in MMA, as in boxing, speed kills.

In November 2013 Belfort faced Dan Henderson in the main event of UFC Fight Night 32 in Brazil in the rematch of their fight from over 7 years before. This time there was a clear winner, as Vitor came out aggressively, dropped his known for his iron durability opponent, followed with the ground and pound and finally finished the fight with an exclamation mark of a head kick that sent Dan Henderson crumpling back to the mat and had the referee wave the bout off just 1:17 into the first round. Needless to say, this performance has also earned Belfort his fifth Knockout of the Night award. Vitor was then scheduled to face the champ Chris Weidman at UFC 173 in Las Vegas but would remove himself from the fight after the NSAC decided to ban all TRT use.

Belfort has fought 4 more times since the TRT ban and has lost 3 of those four.  He is one of the a few fighters left to still be fighters and to have debuted in the 1990s.  Vitor was once a promising prospect for boxing at the Olympics but that never occurred.

Interview  |  Behind the Lens with Vitor Belfort report dead link

Fight! Magazine gets behind the scenes access to Vitor "The Phenom" Belfort.

Fight Music produced this look at "The Phenom," Vitor Belfort.