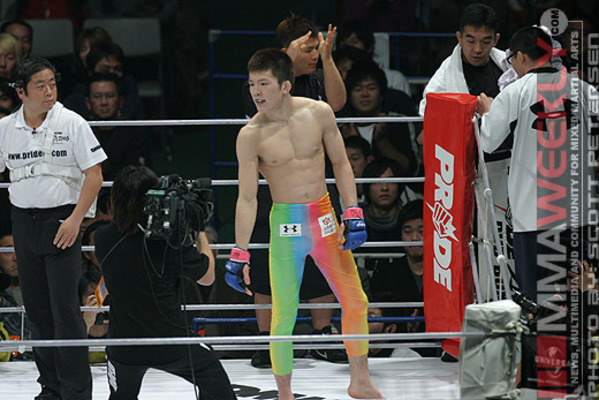 The full video of the widely viewed grappling exhibition match between Shinya Aoki and Fedor Emelianenko.

Shinya Aoki is known for many reasons throughout the world of MMA. It might be his dynamic grappling game, his colorful attire in some of his earlier fights, or for the fact that he simply does not care if he ends up hurting his opponent with one of his many submissions. It is widely recognized that he is one of the most creative and one of the most talented grapplers the sport of MMA has seen.

Aoki originally made his name fighting for Shooto, tallying a 7-2 record. While there, he picked up wins over Kuniyoshi Hironaka (Hironaka held a win over Nick Diaz at the time Aoki defeated him, and later fought in the UFC) and a brutal win over Keith Wisniewski in which Aoki broke Wisniewski's arm with a standing armlock. He made his debut in Pride at 'Pride Bushido 12' against American Jason Black. In the fight, Aoki pulled guard early, and locked in a triangle choke within seconds of hitting the mat. He would win via DQ against George Sotiropoulos in his next fight. He would next fight twice more in Pride, winning both of these fights with spectacular submissions, defeating Clay French with a flying triangle, and then he became the second man in MMA to win with a gogoplata, which he did against Joachim Hansen. Aoki fought once more before the end of Pride Fighting Championships, when he defeated Brian Lo-A-Njoe with an armbar at Pride 34.

Aoki would carry his nine fight winning streak into Dream, when he took on Gesias 'JZ' Cavalcante at the first Dream event. Unfortunately, 'JZ' hit Aoki with illegal elbows, rendering the Japanese submission specialist unable to continue. They would rematch again at Dream 2, in a fight that saw Aoki successfully attacking off of his back, even coming close to finishing an omoplata on the Brazilian. Aoki would win a unanimous decision. His incredible submission skills were on display in his next fight, when he defeated former Olympic wrestler Katsuhiko Nagata with a mounted gogoplata, something not before seen in MMA. After defeating Caol Uno, he would fight Joachim Hansen in the Dream Lightweight GP finals, to determine the first ever Dream Lightweight champion. In the rematch of their fight from 'Pride Shockwave 2006,' Hansen ended Aoki's 13 fight unbeaten streak when he stopped Aoki with strikes in round one.

In his next two fights, Aoki defeated Todd Moore and top lightweight Eddie Alvarez by submission, with neither fight lasting longer than two minutes. He then took on David Gardner at Dream 7. Gardner fought off many submission attempts, surprising many. This fight is most known for Gardner waving to the Japanese crowd, and exclaiming 'Hello Japan!' which exposed an opportunity for Aoki to choke out the American, thus ending the bout. After an unsuccessful attempt at welterweight against Hayato Sakurai, Aoki would tally another three wins at 155, including victories over Vitor Ribeiro, a win in a rubber match against Hansen that saw him win the Dream title, and a controversial win over Mizuto Hirota at 'Dynamite!! 2009.' Aoki submitted Hirota with a hammerlock, breaking Hirota's arm. Aoki then proceeded to put his middle finger in Hirota's face after the victory, and even aimed the middle finger to the crowd. Aoki was unapologetic after breaking the arm of his adversary.

Aoki would then make his U.S. debut against Gilbert Melendez, challenging for the Strikeforce Lightweight title. Aoki was the favorite to some, but would take punishment throughout, losing a decision to the Cesar Gracie product. Since that fight, Aoki has won six of seven, only dropping in a rematch to Eddie Alvarez in Bellator. He has defeated Tatsuya Kawajiri, Marcus Aurelio and Lyle Beerbohm among others in this span. He recently submitted Arnaud Lepont with a triangle choke in a fight for One FC. Aoki would then submit Antonio McKee via punches at Dream 18. Aoki's latest outing saw him challenge One FC Lightweight champion Kotetsu Boku for the title. Aoki dominated the fight from the opening bell with his ground game and submission threats. He eventually sunk in a Rear Naked Choke in the 2nd round to become the One FC Lightweight champion. Aoki has recently expressed interest in dropping to Featherweight for his next fight.

Known as 'Tobikan Judan,' which loosely translates to 'Master of Flying Submissions,' Aoki is a very inventive submission stylist and is a threat no matter where he is on the mat. Unlike some grapplers that are mainly dependent on takedowns and a top game, Aoki is equally effective from his back, which means that he doesn't always need to score takedowns to be effective. He is currently fighting out of Singapore's Evolve MMA, where he is working diligently on his striking. He is currently signed with One FC and Dream.