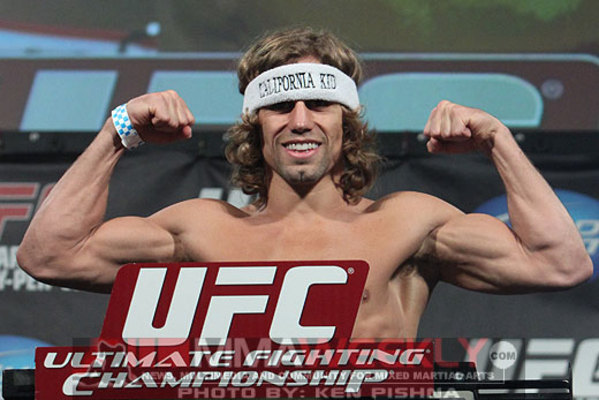 Urijah Faber is ineligible for regional rankings due to inactivity.
Fighters must have at least one completed MMA bout in the past two years to be ranked.

Before becoming the world’s most famous featherweight, the charismatic fighting sensation Urijah Faber ran his professional MMA record to an early 11-1 from 2003-2006. He earned notable victories over Ivan Menjivar and Charles Bennett before winning the WEC Featherweight Championship over Cole Escovedo by TKO (corner stoppage) on March 17, 2006. "The California Kid" defended the title five consecutive times (securing the WEC record at the time) with impressive dominations of top contenders Joe Pearson, Dominick Cruz (Guillotine Choke), Chance Farrar, Jeff Curran (Rear Naked Choke), and former UFC Lightweight Champion Jens Pulver. At the peak of that run Faber was the world’s number one featherweight, the WEC's number one fan draw with no other fighter even a close second, and looked unbeatable. Then he hit a rough patch. He dropped a pair of bouts to Mike Thomas Brown in 2008 and 2009, respectively, and lost to dynamic newcomer Jose Aldo in the WEC’s first-ever live Pay-Per-View event. Despite those setbacks, Faber has never broken mentally inside the cage and remains extremely threatening in all phases of the game.

Training out of Team Alpha Male in Sacramento, California, Faber is an extraordinary athlete. In a sport in which ring announcers routinely pronounce fighters to be "explosive", Faber truly is. His punching, kicking, leaping and scrambling emerges from nowhere, as if plugged into its own power source. He is a true representative of modern mixed martial arts, combining a technical and creative striking game with slick, powerful submission holds, making him one of the most complete fighters competing below the lightweight limit of 155 lbs. Faber knocks out opponents with surprising, unpredictable punches and knees from improbable angles. But the majority of his wins have come by submission, including a 2009 Guillotine Choke win over Pulver and a 2010 Rear Naked Choke victory over Raphael Assuncao, who had never been submitted to that point. Regardless of his future success, Faber’s place in the MMA history books is secure, as he was the first mainstream star to emerge from a division below 155 lbs. in the sport’s history, and is still a gigantic fighting star today.

Faber has been involved in a public feud with first-ever UFC Bantamweight Champion Dominick Cruz. The two met in 2007, where Faber finished Cruz in the first round with a guillotine choke. Cruz earned the ire of Faber prior to the fight by signing his name over the image of Faber's face on the event poster. Since the WEC has folded into the UFC, and since Faber moved down to 135lbs, the two were destined to meet again, this time for Cruz's UFC belt. However Cruz would come out on top this time defending his belt with a Unanimous Decision victory. Faber would follow up with a Submission of the Night win over Brian Bowles.

Faber was set to face Cruz for a third time as they were both set as coaches for the Ultimate Fighter. However it was revealed that Cruz had injured his ACL and would not be able to fight. Instead it was announced that Faber would fight Renan Barao for the Interim title with the winner going on to fight Cruz for the undisputed title once he returns. Faber lost the fight by Unanimous Decision also suffering a broken rib in the first round.

Faber would then face Ivan Menjivar at UFC 157 who he would submit in the first round with a rear naked choke. He was then tasked with fighting a friend and someone he had trained with, Scott Jorgensen. In a good back and forth fight Faber was able to take Jorgensen's back and sink in the rear naked choke in the 4th round.

Faber's next challenge came in the form of the Brazilian fighter Yuri Alcantara, who previously fought in the 145, 155 and even 170 pound weight division. Despite being knocked down early in the fight, Faber rallied, reversed the position and dominated Alcantara with his wrestling for the reminder of the fight winning a unanimous decision.

Faber next faced the young prospect and another of his friends, Michael McDonald, well known for his punching power. In the first round Faber took his opponent down and outstruck him on the feet before knocking him down and locking a tight choke in the second round resulting in a submission victory. This fight has also earned Urijah the Submission of the Night bonus worth $50,000 and marked his 30th career victory (17th by submission).

Following another devastating injury to Bantamweight Champion Dominick Cruz, Faber was granted a rematch with now-Undisputed Champion Renan Barao at UFC 169 on February 1, 2014. Cruz decided to vacate his belt rather than hold up the division for another lengthy absence. He would however fall short of winning the title again as he was finished by Barao in the first round. Faber thought the stoppage was a little premature and felt like he could have kept fighting but Herb Dean saw it differently and stepped in to call a halt to the fight.