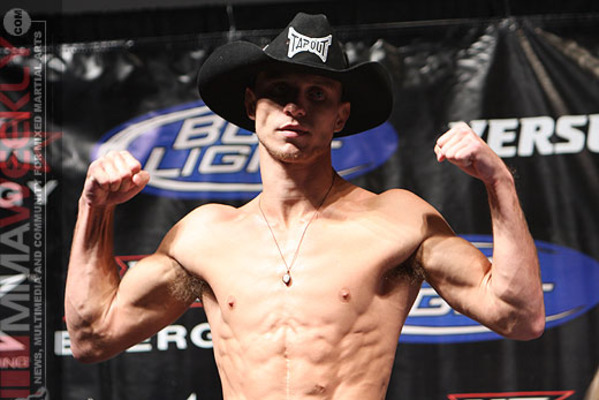 Fighting for a major organization has made Donald Cerrone ineligible for regional rankings.

A former professionel bull ryder Cerrone is a black belt in Brazilian jujitsu.

Tied most bouts in a twelve month period 6 with sam alvey.

After putting together an undefeated professional kickboxing and Muay Thai record of 28-0, Donald “Cowboy” Cerrone decided to try his hand at mixed martial arts in 2006. Cowboy was found by the TapouT crew and was featured on the TV series TapouT. Cerrone was ultimately sponsored by the company and went on to defeat Anthony Njokuani.

After reeling off seven straight wins, including finishes of Nate Mohr and Njokuani, he was invited to join the WEC lightweight division in 2007. Cerrone earned his 1st title shot in the organization after defeating Danny Castillo at WEC 34 and Rob McCullough at WEC 36. This was his first of a couple title fights in the organization. Though Cerrone was on the losing end of both, the fights earned Cowboy stardom and respect.

After the Zuffa purchase and the merger of the UFC/WEC, Cerrone’s stock has risen astronomically, as he has defeated the likes of Chris Horodecki, Jeremy Stephens and others en route to becoming the first to KO Melvin Guillard and one of the promotion’s biggest stars.

Although Cerrone is known for his striking prowess and Muay Thai tenacity, the vast majority of Cerrone’s wins have come by way of submission.  His striking skill coupled with his every growing ground game, physical tools and durability have made him one of the most difficult men in the promotion to finish. In fact, the only people to ever finish Cowboy are current UFC lightweight king, Anthony Pettis and former UFC Champion Benson Henderson. On August 26th, 2016 Cerrone was awarded his black belt in Brazilian Jiu-Jitsu under instructor Elliot Marshall (https://www.instagram.com/p/BJjk407h3sf/ - link to Instagram post)

Donald also is a company man, willing to take any fight on any notice for the promotion's benefit. Cowboy fought five times in 2011, four of which came in the 2nd half of the year.  Cerrone went undefeated in 2012 and lobbied for a fight with Anthony Pettis. The fight with Pettis finally occurred on UFC on FOX 6. Cerrone would go on to lose the fight via 1st round knockout. He would bounce back with a win when he faced Strikeforce vet KJ Noons at UFC 160 winning the fight by decision. His next bout would be the Co-Main Event of UFC Fight Night 27 against Rafael Dos Anjos, a fight he would lose by decision. Cerrone would bounce back with a win over Evan Dunham at UFC 167. He submitted Dunham in the second round with a triangle choke that would earn him Submission of the Night. He topped it barely two months later by scoring a first round head kick Knockout of the Night over Adriano Martins at UFC on FOX 10. Before the fight Cowboy famously remarked about his opponent that he "never watched 10 seconds of that kid" and will only see him for the first time come weigh ins. As it turns out, knowing nothing about his opponent didn't stop Cerrone from winning the fight in a devastating fashion.

He would pick up another win over Edson Barboza in a performance of the night finish with his first round rear naked choke for the finish.

On 16 July, Cerrone faced Jim Miller in the main event of UFC Fight Night 45. The fight opened with an explosive 5 minutes; with good exchanges from both fighters. Round 2 opens with Cerrone landing several kicks. These took a toll of Miller who looked hurt; in perhaps a desperation attempt Miller goes for a takedown and is stuffed by Cerrone. Cerrone landed a beautiful head kick severally rocked Miller. At 3:31 the fight was stopped via KO. This fight extends Cerrone's win streak to 4 fights; all 4 giving him fight bonuses, including the last 2 earning him Performance of the Night.

Cerrone was briefly linked to a bout with surging contender Bobby Green, however the UFC changed opponents giving Cerrone the opportunity to face former Bellator lightweight champion Eddie Alvarez. This bout took place on September 27, 2014 at UFC 178. The fight went along as most of his fights do, he started slowly getting tagged repeatedly in the clinch (roughly 12-15 unanswered blows) and lost the first round. After that, Cerrone sped up the tempo to dominate Alvarez the remaining round to earn a unanimous victory.