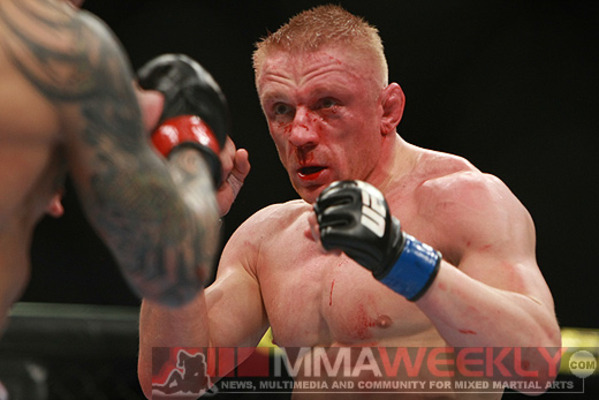 Dennis Siver is ineligible for regional rankings due to inactivity.
Fighters must have at least one completed MMA bout in the past two years to be ranked.

Dennis Siver is a Russian-German featherweight fighter currently signed to the UFC. He is a purple belt in Brazilian Jui Jitsu and a black belt in Tae Kwon Do and he trains out of Mannheim, Germany. He has previously fought for Cage Warriors FC. He has notable wins over Jim Wallhead, Paul Kelly, Spencer Fisher, Andre Winner, George Sotiropoulos, Matt Wiman, Diego Nunes and Nam Phan. He has previously won the UFC "Submission of the Night" one time, "Knockout of the Night" two times, and "Fight of the Night" three times. Of his twenty two wins, fourteen have been finishes including nine submissions.

Although Siver actually holds more submission victories than knockout victories, he prefers to stand and trade strikes with his opponents. He has won Knockout of the Night honors in two UFC fights, stunning his opponents with spinning back kicks before polishing them off with punches. Siver’s spinning back kicks are among the best in the business.

Siver began training in martial arts when he was fifteen years old. He started with sambo, judo, kickboxing and tae kwon do. His family moved to Germany when he was seventeen and within two years, he was the German WAKO amateur kickboxing champion. He began his professional MMA career in 2004. He would achieve a 5-1 record in his first two year fighting in various promotions around Europe. He would find success with Cage Warriors FC when he entered a one night, eight man tournament in 2006. He would finish his first two opponents before falling to an armbar in the tournament final. He would go 3-1 in his next four fights, including a submission win over Bellator veteran, Jim Wallhead.

After fighting in Europe for the first three years of his professional career, Siver was invited to join the UFC in 2007. He would make his debut against Jess Liaudin at UFC 70, but would be submitted by armbar in just eighty one seconds. He would bounce back when he dropped to lightweight and was able to knockout Naoyuki Kotani in the second round of their UFC 75 fight. Unfortunately, he would lose back to back fights to Gray Maynard by decision, which earned "Fight of the Night" honors, and Melvin Guillard by TKO and he was released from the promotion. After his release, he would take another fight in Germany and was able to pick up a submission victory.

Dennis was given another shot in the UFC when he was brought back for UFC 93 in Dublin, Ireland. He would finish his opponent by spinning back kick and picked up the "Knockout of the Night" bonus. He would next square off with Dale Hartt at UFC 99 when the UFC made it's first appearance in Germany. He would submit his opponent in just three minutes. Siver would again pick up "Knockout of the Night" when he defeated Paul Kelly at UFC 105, but would suffer defeat again, this time at the hands of Ross Pearson in early 2010 in a fight that earned "Fight of the Night". Siver would bounce back with a decision win over Spencer Fisher and a first round submission over Andre Winner which earned him the "Submission of the Night" award. He would continue his winning streak by handing George Sotiropoulos his first defeat in the octagon and a close and controversial decision over Matt Wiman at UFC 132. He was set to take on Sam Stout at UFC 137, but when his opponent pulled out due to injury, he was replaced by Donald Cerrone. He would lose the fight by submission in the first round which snapped a nineteen month winning streak and moved his overall UFC record to 8-5

In 2012, Dennis would move down to featherweight to become more competitive. He would make his 145 pound debut against Diego Nunes at UFC on Fuel TV 2 in Stockholm, Sweden. Despite being a slight underdog going into the fight, he was able to pick up a unanimous decision win. He was next set to fight Eddie Yagin at UFC 151, but when the event was cancelled, their fight was moved to UFC on Fox 5. Yagin would end up pulling out of the fight due to injury and was replaced by Nam Phan who he defeated by unanimous decision. He was slated to fight Cub Swanson at UFC on Fuel TV 7, but Siver had to withdraw from the fight due to injury. He would end up fighting Swanson five months later at UFC 162, but would lose by TKO with less than three minutes left in the fight. He took on Manny Gamburyan at UFC 168. The fight turned into a back and forth dog fight with Siver coming out with the unanimous decision victory.