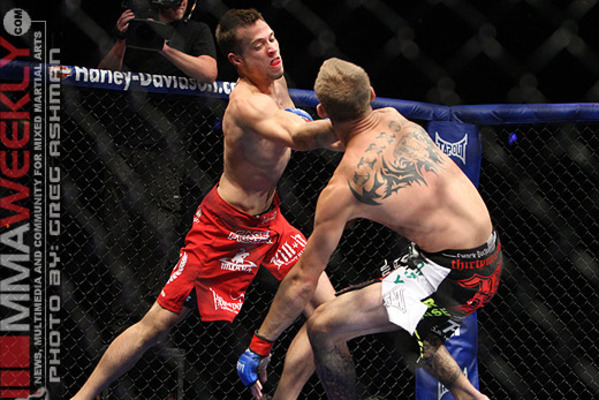 Fighting for a major organization has made James Krause ineligible for regional rankings.

James Leo Krause is an American MMA fighter currently signed to the UFC. A professional MMA competitor since 2007, he has made a name for himself fighting all over the United States, competing mainly in the Midwest. Krause has also competed for top organizations such as RFA, Titan FC, Bellator and WEC. He has notable wins over Michael Johnson, Toby Imada and Sam Stout. Of his twenty wins, eighteen have been finishes including thirteen submissions. He has never been finished by T/KO. He has earned the "Submission of the Night" and "Fight of the Night" bonuses one time each.

Krause was born on June 4, 1986 in Newport News, VA but moved to Odessa, Missouri after his parents got divorced when he was two years old. Krause began attending Odessa High School in 2001, graduating in 2004. Krause opted out of attending college and instead began working full-time before finding MMA.

Before turning professional in 2007, Krause had an astonishing amateur career with a record of 18-1, holding two championships and for six consecutive months was ranked as the number one amateur in the country. On November 28, 2007, Krause made his long awaited professional debut for Kansas' Titan Fighting Championships, defeating Kevin Hengler via technical submission in the first round. Throughout 2008 and 2009, Krause fought all over the Midwest, mostly in Missouri, collecting a 10-0 record with all of his wins coming from stoppages.

In April 2009, Krause signed on with the World Extreme Cagefighting promotion.He made his debut on June 7, 2009 at WEC 41 against Donald Cerrone. Krause was a late-replacement for Rich Crunkilton lost the fight via first round submission (rear-naked choke).

Krause then fought Ricardo Lamas on the preliminary card of WEC 44 on November 18, 2009. After being controlled on the ground for three rounds, Krause lost the fight via unanimous decision (30-27, 30-27, 30-27). He was released from his contract after going 0-2 for the promotion.

Krause signed with Bellator Fighting Championships in April 2010, replacing Ferrid Kheder in the Bellator Season Two Lightweight Tournament. His first bout of the tournament was originally slated for Bellator 15 but was instead moved to a week earlier and held on the Bellator 14 card. Krause fought Season One's runner-up, Toby Imada, losing via submission (armbar). The loss took Krause out of the tournament. He was expected to compete on the Bellator 16 card against an unnamed opponent but was forced off the card due to an injury and was subsequently released from the promotion after going 1-3 in his last four fights.

After being released from Bellator, Krause resigned with Titan FC. His return came at TFC 17 on March 25, 2011 against Nathan Schut. Krause won the fight via TKO after connecting with a head kick. At TFC 19 on July 29, 2011, Krause fought Pride and Sengoku veteran, Clay French, in the main event. Krause lost the fight via split decision.

Two months after his loss to French, Krause fought Steve Schneider at Shark Fights 19, winning via second round submission (rear naked choke). He fought Sean Wilson at TFC 20 on September 23, 2011, winning via first round submission. He was scheduled to fight UFC veteran, Chad Reiner, at the inaugural event for Resurrection Fighting Alliance on Friday, December 16, 2011. However, a few days before the fight, Reiner was forced off the card due to an injury. After going through five different opponents, Krause fough Mark Korzenowski. He won the fight via KO (head kick) only seconds into the first round.

After being eliminated from the Ultimate Fighter, Krause returned to his contract with Resurrection Fighting Alliance. His second fight with the promotion took place at RFA 3 on June 30, 2012. Krause fought a fellow TUF castaway in Amir Khillah. After three entertaining back and forth rounds, Krause was announced the winner via split decision.

Krause next fought at RFA 4 which took place on November 2, 2012 in Las Vegas, Nevada. He fought undefeated Brazilian prospect, Guilherme Trindade. Only 31 seconds into the first round, Krause won the fight via KO. With the fight ending so quickly, RFA offered payin a spot on the RFA 5 card set to take place November 30th, only a month after his latest win. Krause fought journeyman, Joe Jordan, on the RFA 5 card, winning the fight via submission in the third round. During the post fight interview, Krause called out to UFC matchmaker, Joe Silva, proclaiming, "Joe Silva, give me a call sometime, buddy,". He would again fight on the RFA 6 card, this time getting a rematch against Toby Imada. Krause would get the win this time via decision, marking the biggest win of his career.

Krause was signed by the UFC in early 2013 while riding a two year, eight fight win streak. He made his debut at UFC 161 against veteran Sam Stout and was able to submit him via Guillotine Choke at 4:47 of the third and final round. Krause had replaced an injured Isaac Vallie-Flagg for this fight. His performance also earned him Submission of the Night as well as Fight of the Night honors for his UFC debut as well as the $50,000 bonus that goes along with each. His next fight was against Bobby Green at UFC: Fight for the Troops 3. Unfortunately, the fight would end in controversy. Green was deducted a point after two low blows in the first minute of the fight, but when a third appeared to land and Krause fell to the mat, the referee stopped the fight and declared Green the winner by TKO since he believed that the last kick was legal therefore Krause appeared to be verbally submitting. This loss snapped an eight fight win streak.