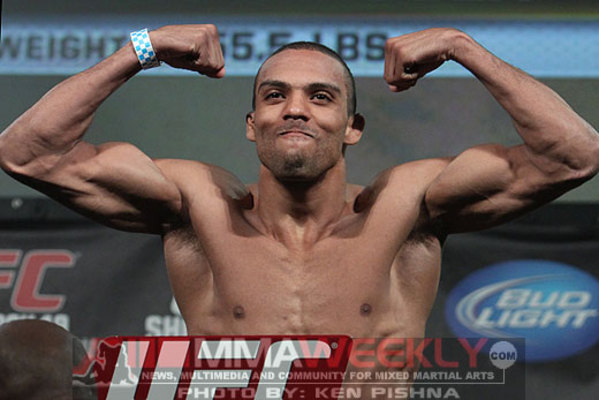 Fighting for a major organization has made Edson Barboza ineligible for regional rankings.

Barboza comes from Nova Friburgo, Rio de Janeiro. His fighting style incorporates Muay Thai and Taekwondo. His professional Muay Thai record is 28-3 with 22 victories by knockout and 17 first round finishes. Barboza moved to the United States in January 2009 and joined "The Armory"  in Jupiter, Florida. Barboza's professional MMA career began in April 2009 in Tampa, Florida, when he defeated Aaron Steadman via TKO due to punches midway through the first round. Barboza then defeated Lee King twice in the Renaissance MMA promotion, first via second round knockout, then submission.

Barboza made his UFC debut against Mike Lullo at UFC 123 where he won the fight via TKO (leg kicks). In his next bout, Barboza faced fellow Muay Thai specialist, Anthony Njokuani at UFC 128. The fight would win Fight Of The Night honors with Barboza winning 29-28 on all three judges cards. Barboza's fight at UFC 142 will have a permanent home in the minds of MMA fans as he completed a spinning wheel kick knockout of Terry Etim at the 2:02 mark of the 3rd round.

Barboza was expected to face Evan Dunham at UFC 146, however, Dunham pulled out with an injury and was replaced by UFC and WEC veteran, Jamie Varner. In what was considered a huge upset, Varner won by TKO (strikes) in the first round, giving Barboza his very first professional loss. Barboza would defeat Lucas Martins by strikes at UFC on FX 7 to get back in the win column. Barboza would pick up his next win over Rafaello Oliveira at UFC 162 when he beat him in the second round with brutal leg kicks that left Oliveira unable to stand up. He would follow that up with a win in a close fight with Danny Castillo picking up the majority decision.  He would lose for only the second time in his career when he was submitted by Donald Cerrone. He gets back on the track after impressive win over Evan Dunham via 1st round TKO (fourth finish by kick in his UFC run). After that, at UFC FN 57 Barboza scored an unanimous decision victory over Bobby Green. Next, Barboza faced Michael Johnson at UFC FN 61 and lost by unanimous decision.