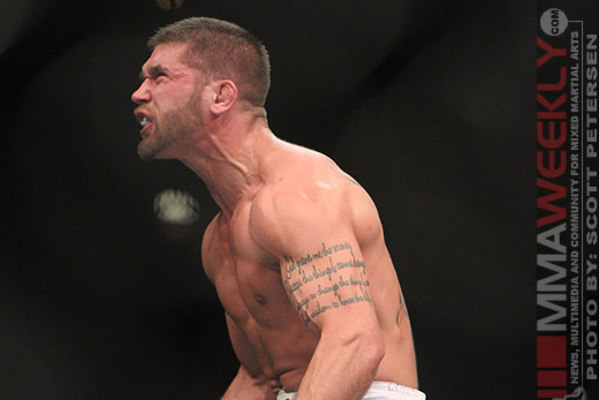 Fighting for a major organization has made Jeremy Stephens ineligible for regional rankings.

Jeremy Stephens began fighting as a professional mixed martial artist as a teenager, winning 12 of his first 13 bouts before being invited to join the UFC in 2007. Since joining the UFC, Stephens has emerged as a talented prospect with the potential to one day fight for the belt, winning bouts with Diego Saraiva, Cole Miller, Rafael dos Anjos, and Sam Stout. He has also met with some tough losses along the way.

Though he has been submitted more than once, Stephens has never been knocked out in a professional fight, and has finished the majority of his wins by way of knockout, including a famous uppercut knockout of dos Anjos in 2008, which won the Knockout of the Night award from UFC 91: Couture vs. Lesnar. Stephens throws hard and keeps moving forward, forcing his opponents to think their way around his aggression or else get KO’d.

Stephens would go 4-5 after the Dos Anjos KO with wins that included a Fight of the Night over Sam Stout and a Knockout of the Night over Marcus Davis. Stephens was expected to face Yves Edwards at UFC on FX 5 however living up to his nickname of Lil Heathen he was arrested on the day of the fight. The UFC did all they could to get him released from jail so he could still fight but to no avail. After being knocked out for the first time in his career when he eventually fought Edwards at UFC on Fox 5, Stephens dropped to featherweight and won a unanimous decision over Strikeforce import Estevan Payan. He would follow that with another win this time over Rony Jason in Brazil when he finished him in the very first round with a perfectly thrown head kick that Jason ducked right into.

Stephens would continue his surge winning his 3rd straight fight when he won a Unanimous Decision over Darren Elkins at UFC on Fox 10. Following the contest against Elkins, Stephens would stumble dropping a unanimous decision to Cub Swanson at UFC Fight Night 44. Looking to get back on the winning track, Stephens would be scheduled to face Charles Olivera at the Ultimate Fighter 20 season finale. Stephens would go on to lose a decision having been defending against submissions for a majority of the bout.

In 2017 Stephens during UFC on Fox 24, Stephens lost a competitive bout against Renato Moicano by split decision. Moicano won the first round, Stephens won the second with the third round being disputed by the judges. Stephens would end this losing streak at UFC 215 where Stephens defeated Gilbert Melendez via unanimous decision the fight won FOTN and was a dominant display by Stephens who landed a record setting five knockdowns in a single UFC fight. In 2018 the success continued for Stephens who won another FOTN against Do Ho Choi during UFC Fight Night Stephens vs. Choi, Stephens won the fight via a 2nd round (punches). The winning streak continued at UFC on Fox 28 where Stephens secured another 2nd round finish this time by KO against prospect at the time Josh Emmett, this would give Stephens another $50k bonus this time as a performance bonus. To end off 2018 Stephens would lose to former WEC and 2 time UFC champion in Jose Aldo who finished Stephens at UFC on Fox  Alvarez vs Poirier 2 via 1st round tko (body punch to GNP).

In 2019 Stephens faced Zabit Magomedsharipov a highly respected prospect at the time during UFC 235, Stephens lost the fight via unanimous decision losing the opening two rounds but winning the 3rd. Stephens would main event another Fight card at UFC Fight Night 159, the fight ended as a no contest after Rodriguez eye poked Stephens early in the first round. This prompted a rematch during UFC on ESPN 6, Stephens would go on to lose this rematch by unanimous decision in a fight which won FOTN.

In 2020 Stephens faced Calvin Kattar at UFC 249 Stephens lost the fight by  2nd round TKO (elbows to GNP), this fight was made a catchweight bout after Stephens missed weight by 4.5lbs. In 2021 Stephens was set to face Drakkar Klose however the fight was scrapped after Klose suffered an injury as a result of a push from Stephens during UFC Vegas 24 face offs. Stephens returned at UFC on ESPN Makhachev vs Moises where he faced Mateusz Gamrot, Stephens lost this fight by 1st round submission (kimura).

In 2022 Stephens contract with the UFC was not renewed which caused Stephens to sign with the PFL where he is scheduled to compete against Clay Collard to start off PFL's regular season for 2022 in PFL 1 (2022).