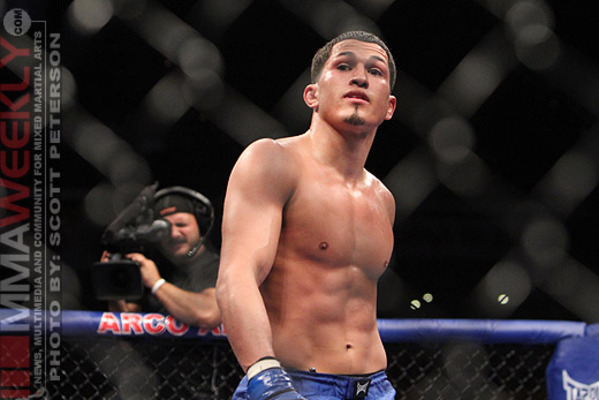 Fighting for a major organization has made Anthony Pettis ineligible for regional rankings.

Following a decision loss in his promotional debut, Pettis found his rhythm, reeling off dramatic inside-the-distance finishes against Danny Castillo (KO/TKO), Alex Karalexis (Submission), and, most remarkably, Shane Roller via submission with only nine seconds remaining in the final frame. The electrifying win over Roller earned Pettis a title shot against reigning champ Ben Henderson in a test of two young lions of the lightweight division.

In addition to his early successes in the cage, Pettis was introduced to the world at large as the focal point of the debut episode of MTV's "World of Jenks," which tracked Pettis in documentary style through his daily life and training. The Pettis World of Jenks episode was viewed by more than two million people, making it one of the most successful series launches in MTV history. "It was an absolute honor to work with Andrew and the staff at MTV," Pettis stated of his participation on the show.


In his match with Henderson, Pettis was able to get the better of "Bendo" several times with his kickboxing, and avoid being taken down by the champion's wrestling. After four close rounds, and the fight seemingly hanging on the fifth rounded, Pettis surprised Henderson by leaping of the kick, and performing his spectacular "Showtime kick" which would lead to him winning the round and the fight. The matchup was the last ever held by the WEC, and celebrated one of the best fights of 2010.

With the WEC and UFC merger Pettis was lined up for a title shot with the winner of Frankie Edgar and Gray Maynard. However that fight went to a draw so an immediate rematch was scheduled, and then delayed another 5 months with both men sustaining injuries. Pettis didn't want to be side lined waiting for that fight so he took a fight with Clay Guida losing a unanimous decision and his title shot. Pettis bounced back with a split decision win over Jeremy Stephens and a highlight reel head kick knockout over Joe Lauzon.

Following "Showtime's" knockout over Lauzon, Dana White again declared Pettis would receive a title shot. However, popular opinion led to Frankie Edgar receiving a rematch with new champion Ben Henderson. When Nate Diaz vs Jim Miller was announced as the winner receiving the next title shot, Pettis elected to have elbow surgery done as all major opponents in the lightweight division were booked in other matches at the time.

Pettis next fought Donald Cerrone at UFC on FOX 6 winning by a quick first round knockout. After the win, Pettis was promised a title shot by UFC president Dana White, which he would live up to and offer Pettis a shot at Jose Aldo's featherweight title in August. However due to a knee injury Pettis was forced to withdraw from the bout and once again miss his shot at a title. However thanks to a TJ Grant injury it would set Pettis up for a title shot and rematch against Ben Henderson in his home state of Milwaukee. Pettis would once again walk away victorious however this time he was able to finish Henderson in the first round with a well executed armbar. He would become the new lightweight champion as well as earning Submission of the Night.

There was talks of a match up with featherweight champ Jose Aldo but instead Pettis would coach the 20th season opposite Gilbert Melendez with the two meeting for the lightweight strap afterwords. On December 6th, 2014 Anthony Pettis defeated Gilbert via guillotine choke in the 2nd round to retain his UFC lightweight championship. At the UFC 181 post-fight press conference Pettis was questioned by Khabib Nurmagomedov on whether he would receive the next shot at the title. Pettis agreed, but the bout was never signed, instead Pettis would defend against Rafael dos Anjos. Dos Anjos would pull off the upset taking the title from Pettis in a dominant five round decision.

Pettis fought Tony Ferguson at UFC 229. Pettis dropped Ferguson in the fight, but broke his hand prompting his corner to throw in the towel between the second and third round.