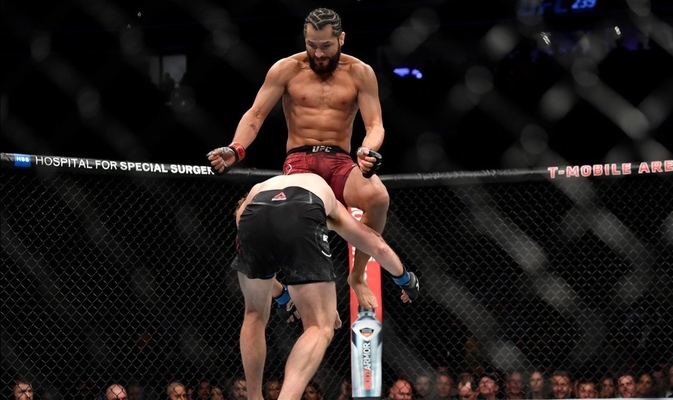 Fighting for a major organization has made Jorge Masvidal ineligible for regional rankings.

Besides being known for his love of fast food and his relationship with Kimbo Slice, Jorge 'Gamebred' Masvidal has evolved into an extremely dangerous fighter at 155 pounds. He gained notoriety when he fought Slice's protege, a man named 'Ray,' on two separate occasions. He was known in Miami for beating up men much larger than him in street fights.

Prior to signing to Strikeforce, Masvidal accomplished a fair amount in his first 13 fights, knocking out Joe Lauzon, Roli Delgado, and Yves Edwards with a head kick. He would then win two fights in Strikeforce, defeating Matt Lee and Ryan Healy. He would then sign to fight Rodrigo Damm in Sengoku, where he would lose by TKO for the first time in his career.

After compiling three more victories, Masvidal would (unfortunately for him) be on the receiving end of one of the most memorable submissions in MMA history. In a fight at Bellator 5 against Toby Imada, Masvidal would be choked unconscious with an inverted triangle choke. Masvidal rebounded by winning twice more, notably defeating Satoru Kitaoka. Masvidal would step up to welterweight to take on Paul 'Semtex' Daley in a fight at Shark Fights 13. Despite having a size disadvantage, Masvidal would see the judges scorecards, and lost a fight where some believed he was the winner. After a valiant performance there, he would sign with Strikeforce.

The Miami based fighter returned to lightweight in his Strikeforce debut, where he defeated previously unbeaten Billy Evangelista by decision. He followed up by beating KJ Noons, and earning a shot at Gilbert Melendez, in a fight for the lightweight crown. Unfortunately for 'Gamebred,' he would lose a unanimous decision to the champ. However, Masvidal would put on a solid performance against Justin Wilcox in his next fight. Despite stunning the AKA product in the bout, Masvidal would win the decision.

With Strikeforce going under Masvidal would get signed to the UFC and be match against Tim Means in his first bout, which he would win by Unanimous Decision. He would follow that up with a second round D'arce choke over Ultimate Fighter winner Michael Chiesa, handing Chiesa his first ever loss. The American Top Team fighter next took on top Russian prospect, Rustam Khabilov, at UFC: Fight for the Troops 3 but would end up on the short end of a unanimous decision. Despite his loss, he would be awarded the "Fight of the Night" bonus for his performance.

Jorge Masvidal went on to amount a total UFC record of 11wins and 6 losses. He gained notoriety for his recent two UFC wins as they were both fights he won via spectacular knockouts.

The first of them being the fight against Darren Till at UFC On ESPN + 5 in London.

Jorge got dropped by Till in the first round but recovered quickly. J.Masvidal went on to win the round and finished by K.O.ing Darren Till mids into the second round via punches and silencing the London crowd.

After the fight Masvidal and Leon Edwards who also had fought on the same card, would be involved in a quick altercation that later got to be known as "the three piece with soda" - incident.

Jorge Masvidal was giving a post fight interview and was interrupted by Leon Edwards addressing him from the back, Masvidal then went to face Leon, some punches were thrown, some did hit some did miss but security went in and stopped anything bad from happening that night. Leon Edwards would not press any charges but said he would gladly face Jorge Masvidal in the UFC octagon to settle the scores.

Jorge Masvidal campaigned for a title fight against welterweight champion Kamaru Usman but it got denied and instead he got offered Ben Askren. Ben Askren was campaigning himself for the fight with Masvidal and talking a considerate amount of shit before their fight.

Jorge Masvidal has never been shy about his real feelings towards Ben Askren stating on the Joe Rogan podcast, that he doesn't like the dude and that he wouldn't want to finish their fight early but instead put Ben under a beating for the whole duration of the 3 round fight.

Jorge Masvidal's level of fame raised to "Megastar fame" as he K.O.ed Ben Askren at UFC 239 via flying knee in only 5 seconds of the first round. He owned the fastest K.O of UFC history and the K.O of the night bonus.

Later that same night his team would release video footage of Masvidal training the exact flying knee he finished Ben Askren with.

Jorge Masvidal was called out by Nate Diaz after his win over Anthony Pettis at UFC 241.

At the after fight press conference Nate Diaz then explained he wanted to fight Masvidal because he considers him to be a real fighter that shows up to fight.

Nate Diaz promoted the possible event even further by stating that the fight with Masvidal would be for the "BMF belt" as he would want to defend his BMF title against Jorge Masvidal.

Jorge Masvidal accepted the callout and stated his excitement for this fight.

At UFC 244 in MSG, NY Jorge Masvidal is going to fight Nate Diaz for the BMF belt.

Dana White got after it and got the BMF title belt made.

Masvidal went on to win the BMF title at UFC MSG against Nate Diaz via doctor stoppage it the third round. Masvidal had put Nate on a beating for the whole fight and even dropped Nate with a kick to the face in the first round. Nate survided the first rounds in Diaz style fashion but got beaten hard by Masvidal which ultimately lead to a big cut on his eyebrow which put the octagon doctor on the spot. The doctor waived the fight as he considered the cut to be too deep to continue. After the fight he would claim that it was a bullshit stoppage as he thought he was getting the upper hand in the fight due to Masvidal slowing down.

Jorge Masvidal got caught up in contract negotiations with the UFC after his win over Nate Diaz. He stated that he felt most of the UFC roster is massively underpaid. That derailed his first title shot opportunity in the UFC and finally Usmann would get booked against Gilbert Burns.

Jorge finally would get close to what he would have wanted to earn when stepping up on short notice (6 days) against Usmann at UFC 251 on fight island in Abu Dhabi due to Gilbert testing positive for Covid-19 virus.

The fight against Usmann didn't go his way as he lost a five round decision to the dominant champ.