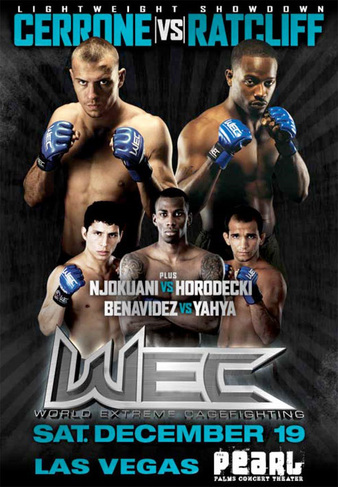 In the weakest WEC event of 2009, the year-end WEC 45 fight card featured no title bouts, a first for the year. In the main event, lightweight contender and fan favorite fighter Donald Cerrone defeated Ed Ratcliff with a third-round Rear Naked Choke to reemerge as the top contender to the belt, which would be contested the following month by Jamie Varner and Ben Henderson.

Canadian prospect and IFL veteran Chris Horodecki made his promotional debut on the card, getting knocked out in the first round by Anthony Njokuani when he inexplicably turned his back on his opponent after a stand-up.

The WEC produced this promo video for its upcoming event, WEC 45 from the Pearl at the Palms in Las Vegas.